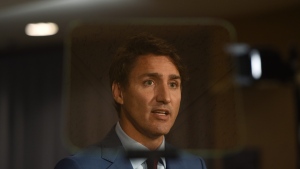 Liberal Leader Justin Trudeau is framed by a teleprompter as he makes a policy announcement promising to ban all military-style assault rifles as part of a broader gun-control plan that will also take steps towards restricting and banning handguns in Toronto on Friday, Sept. 20, 2019. THE CANADIAN PRESS/Sean Kilpatrick

TORONTO - The majority of the candidates to become the next Ontario Liberal leader say they are glad Justin Trudeau has apologized for wearing blackface.

Mitzie Hunter and Michael Coteau, who are black, both say what the federal leader did was wrong, but this is a teachable moment and should spark important discussions.

Steven Del Duca criticizes Trudeau's actions, but says his apology was sincere and he needs to work to earn forgiveness.

Alvin Tedjo, who is of Indonesian descent, took a stronger tone in his statement, saying he is incredibly upset and disappointed in Trudeau, but he will still vote Liberal next month because the party is bigger than one person.

Kate Graham issued a statement saying people are rightfully hurt by the images, but didn't slam Trudeau by name.

Trudeau has apologized for at least three instances that have emerged of him wearing face-darkening makeup as recently as 2001.