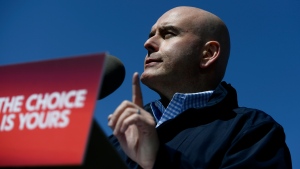 Ontario Liberal Leader Steven Del Duca speaks at a campaign event at a park in Ottawa, on Saturday, May 7, 2022. THE CANADIAN PRESS/Justin Tang

Ontario Liberal Leader Steven Del Duca announced over the long weekend that, if elected, he would take action to put an end to the string of carjackings that has plagued Toronto.

The leader has already said he would ban the sale, possession, transport and storage of handguns in Ontario, as well as crack down on gun smuggling at the borders—although few details have been released about how this policy would be implemented.

On Saturday, Del Duca added that his government would strike a provincial auto theft task force to tackle carjackings driven by organized crime. The task force would be comprised of representatives from various police forces as well as crown prosecutors.

“Every day, we’re seeing more and more brazen carjackings at gunpoint. It’s a frightening reminder that we need urgent action to get handguns off our streets,” Del Duca said in a statement.

“These brazen attacks are escalating and endangering the lives of families across Ontario – and the fear needs to end.”

This commitment was not initially included in the Liberal Party's platform.

Del Duca made the pledge while standing at the corner of Islington Avenue and The Queensway in Etobicoke, the area where Maple Leafs star Mitch Marner was carjacked at gunpoint.

According to police, three suspects approached Marner’s vehicle around 7:45 p.m. Two of them were armed with guns and another had a knife.

Marner complied with the demands and was not physically injured, but he said the incident was “scary.”

Three armed carjackings occurred in Toronto on Wednesday in the span of two hours.

By Friday, Toronto Mayor John Tory said that there have been 93 carjacking incidents in the city so far this year. At this time in 2021, there were 21.

Toronto police confirmed that of the 93 carjackings, 64 were under the Hold Up Squad's mandate and included weapons or violence.

Ontario Liberal Leader Steven Del Duca speaks at a campaign event at a park in Ottawa, on Saturday, May 7, 2022. THE CANADIAN PRESS/Justin Tang