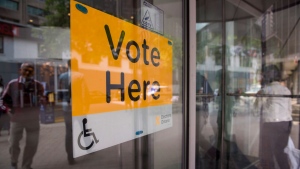 An Elections Ontario sign is seen at University - Rosedale voting location at the Toronto Reference Library on Thursday, June 7, 2018. THE CANADIAN PRESS/Marta Iwanek

TORONTO - The Ontario Liberals won two Ottawa-area byelections in convincing fashion Thursday night, hanging onto the ridings with more than 50 per cent of the vote.

While the party was expected to hold the ridings heading into the vote, interim Liberal Leader John Fraser said the results send a message.

Blais, an Ottawa city councillor, and Collard, a local French-language school board trustee, will bring the Liberal ranks in Ontario's legislature to eight members.

In Ottawa-Vanier, Collard cruised to victory with more than 10,300 votes, besting second-place finisher NDP candidate Myriam Djilane by a margin of more than 5,300 votes.

Genevieve Tellier, a political science professor at the University of Ottawa, said the local races lacked a dominant issue, but the poor showing by the candidates for the governing Progressive Conservatives is noteworthy.

In Orleans, the Tories garnered just over 20 per cent of the total vote, down from close to 35 per cent in the 2018 provincial election.

“I think that is a sign of dissatisfaction with the government,” Tellier said.

Tellier said the victories will give the Liberals some life heading into a convention to select a new leader next week.

“This is will mean more voices at the legislature, that's a good thing for them,” she said. “It's a good starting point for the Liberals, but the highlight will be the convention.”

The party remains well short of the 12 seats needed to achieve official party status. The mark was previously eight seats before the Ford government raised the threshold in 2018.

The designation is more than just a title, it comes with funding that can be used for research, staff salaries and other purposes the party caucus determines.

The byelections were necessary after former Liberal legislators Nathalie Des Rosiers and Marie-France Lalonde stepped down in 2019.

Des Rosiers resigned last summer to take a position at the University of Toronto, while Lalonde left in October to represent the riding federally.

The Ontario Liberal Party has been engaged in a lengthy rebuilding process since suffering the worst defeat in its history during the last provincial vote. It will select a new leader to replace former premier Kathleen Wynne during a leadership convention March 7.

In a statement Thursday night, former cabinet minister Steven Del Duca who is the leadership race front-runner, praised both Blaise and Collard.

“Stephen and Lucille ran exceptionally strong campaigns that focused on education, health care and Doug Ford's failed record in Ontario,” he said. “I know they will be strong advocates for their community and the City of Ottawa.”