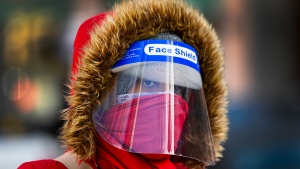 A woman bundles up in the cold weather wearing her PPE during the COVID-19 pandemic in Toronto on Thursday, February 11, 2021. THE CANADIAN PRESS/Nathan Denette

Ontario’s cumulative COVID-19 death toll has surpassed 7,000 on Wednesday, as the province reported less than 1,000 new infections on Wednesday.

Wednesday marks the sixth day of a downward trend in daily case counts.

The seven-day rolling average is 1,084, unchanged from a week ago.

To date, there have been 7,014 virus-related deaths across the province.

Of the latest fatalities, two are among long-term care home residents.

According to the province’s latest epidemiological summary, 1,090 more people have recovered from the disease, resulting in 10,397 active cases of the virus across the province.

Hot spots within the Greater Toronto Area continue to account for the majority of new cases in Ontario.

“Locally, there are 249 new cases in Toronto, 164 in Peel and 92 in York Region,” Ontario Health Minister Christine Elliott tweeted.

More than 43,100 test specimens are still under investigation.

The increase in testing has contributed to a drop in the province’s positivity rate to 2.4 per cent, compared to 2.9 per cent on Tuesday, according to the Ministry of Health.

The number of people hospitalized across the province dropped slightly compared to a day ago.

There are currently 668 people hospitalized due to the virus in Ontario, down from 677 on Tuesday, according to the Ministry of Health.

However, according to numbers released by local public health units and hospitals there are 867 patients in Ontario hospitals due to COVID-19 infection.

Of those hospitalized, the Ministry of Health said there are 274 in intensive care units and 188 breathing with the help of a ventilator.

There have been more than 303,700 lab-confirmed cases of COVID-19 across the province since the virus first emerged last January and 286,352 recoveries.

To date, 266,710 Ontarians have been fully vaccinated with a COVID-19 vaccine.

Two doses of a vaccine is required for full immunization.

On Friday, AstraZeneca’s COVID-19 vaccine joined Pfizer-BioNTech and Moderna on the list of approved vaccines across the country. Ontario is expected to receive more than 100,000 doses of AstraZeneca on Wednesday.

A woman bundles up in the cold weather wearing her PPE during the COVID-19 pandemic in Toronto on Thursday, February 11, 2021. THE CANADIAN PRESS/Nathan Denette