Ontario moving ahead with municipal funding cuts in 2020: Doug Ford 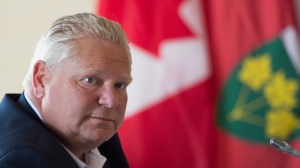 TORONTO -- Ontario will go ahead with some of its controversial municipal funding cuts for public health and child care next year, with Premier Doug Ford telling a gathering of municipal leaders on Monday that the government was making the move after listening to their concerns.

The Progressive Conservatives tried to force retroactive funding cuts on communities earlier this year but had to cancel them in May after municipal leaders complained their annual budgets had already passed.

It was unclear whether the cuts would go ahead next year but the government said Monday that they will now take effect Jan. 1.

"We recognize our government moved quickly when we came into office to address our inherited challenges," Ford told a gathering of the Association of Municipalities of Ontario in Ottawa. "But my friends, we're listening to you."

The province's new plan will see all municipalities -- including Toronto -- pay 30 per cent of public health care costs. Under the initial plan, Toronto would have been on the hook for 50 per cent of the cost.

Previously, municipalities had varying public health cost-sharing arrangements with the province, with Ontario paying 100 per cent or 75 per cent in some cases.

The premier said the province would be providing "transitional funding" to municipalities as they dealt with the cuts, but his office could not say how much that would amount to.

"If it is only transitional funding between 2019 into 2020, then really we're just softening the blow but cuts will come in 2021," he said. "We really need a lot of clarity from the premier and government."

"We cannot achieve these things with abrupt, unilateral changes and it will take more than simple belt tightening to make things better," McGarvey said. "Working together, we can avoid unnecessary turmoil, and respect the essential front line-services that our governments deliver."

Toronto Mayor John Tory said the cost-sharing changes appear to be an improvement from what his city had faced earlier, but noted that the cuts will still have an impact.

"We will be reviewing the full details of today's proposal, particularly with regards to child care funding in Toronto, where based on information currently available, the city could still face significant impacts to its budget next year," he said.

The chairman of Toronto's board of health said public health cuts would have a negative impact.

NDP Leader Andrea Horwath slammed the Ford government for pushing ahead with the cuts.

"Municipalities -- families -- can't afford to fill all the financial holes caused by Ford's deep cuts, but the human cost of failing people when it comes to public health, ambulance services and child care is unthinkable," she said.

Green party Leader Mike Schreiner said the government's decision to proceed with the cuts was "disappointing."

"We cannot play around with issues like vaccinations, food safety and disease control," he said. "It is very problematic if the province no longer sees public health as its responsibility."

Several municipal leaders had criticized the province's various cuts to municipal funding earlier this year, characterizing them as "downloading by stealth."

For weeks, Ford and his cabinet ministers had defended the cuts as necessary to tackle an urgent financial situation, and said municipalities needed to do their part as the recipients of a large share of provincial dollars. The government is trying to eliminate an $11.7-billion deficit.

In the midst of taking heat from municipalities, Ford announced up to $7.35 million in total for audits to help them find savings in their budgets. His office said Monday that 34 out of 39 eligible municipalities took the province up on its offer.

School boards were also eligible to apply, but the premier's office said only two did so the deadline for them to apply is being extended to Aug. 30.