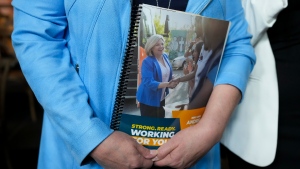 TORONTO - Ontario's New Democrats are pledging to run larger deficits than the Progressive Conservatives and Liberals if elected and would likely not balance the budget for six years, but the party is eyeing some cost savings from cancelling a gas tax cut.

That pledge is expected to save $600 million in the first year by reversing the Progressive Conservative government's move to reduce the provincial portion of the gas tax by 5.7 cents a litre for six months starting July 1.

Catherine Fife, who has served as the NDP's finance critic, presented the costing Sunday and acknowledged the high cost of living, including rising gas prices that have topped $2 a litre, but said the temporary cut from the Tories is just a “gimmick.”

“We are looking for a long-term, sustainable strategy to alleviate gas prices, but also to stabilize,” she said, pointing to the party's promise to regulate gas prices.

“When I'm talking about these things at the door, people say, 'Well, why isn't the government addressing the core issue, instead of, you know, $12 a month or covering the cost of half of a gas tank?”'

The NDP has suggested the cut might not benefit consumers, but could instead help the oil and gas companies.

The Liberals have not promised to cancel the planned cut and NDP Leader Andrea Horwath tied them and the Progressive Conservatives together in a tweet suggesting the money is better spent on public services.

“(Progressive Conservative Leader Doug) Ford wants to take $600M from hospitals and schools to line the pockets of his big gas buddies,” she wrote. “Now Del Duca wants in. I guess they've got buddies in common.”

New sources of revenue in the NDP costing include gaining $1.9 billion by year three from raising the capital gains inclusion rate from 50 to 100 per cent on corporations, except for small businesses, and people with a net worth of over $3 million - with a primary residence exemption in place.

The party would also reallocate billions in contingency funds after the auditor general flagged the PCs' recent budget as having a higher-than-usual amount.

The largest expenditures in the NDP plan include $8.6 billion by the third year to double welfare and disability support payment rates, a pledge made Saturday following criticism that the initial plan to raise rates by 20 per cent was too low.

It all adds up to a plan that would see a nearly $21.5-billion deficit the first year - higher than the Progressive Conservative plan of $19.9 billion - followed by a deficit of $18.4 billion in year two and just over $13 billion in the third year.

The costing document doesn't go beyond a third year, as party officials say projections that far out get “hazy,” but they expect they could balance in 2028-29.

Fife said it is important to spend now, coming out of the pandemic that exposed cracks in the education and health-care systems.

The Liberals say they would run a higher deficit than the PCs plan in year two, but would balance a year sooner than the Tory projection of 2027-28.

The NDP costing comes 20 days after the party released its platform except for the finances, and 17 days after the PC government budget on which the New Democrats said they needed to base their calculations.

The party says their plan would protect middle-class families from tax and fee hikes, ensure the wealthiest people and corporations pay their fair share and make life better for everyone.

New Democrats have proposed a “Green New Democratic Deal,” which they say is their standalone environmental plan, funding promises through revenue from a promised cap-and-trade system.

A projected $4.6 billion by the third year of that system would go toward home energy retrofits, cover half of municipalities' net transit operating costs and a rebate for electric vehicles, as well as return a quarter of the money to residents disproportionately impacted by carbon pricing.

Promises to implement pharmacare and dental care would cost $485 million and $645 million by the third year, respectively. The NDP's health promises total more than $3 billion a year and also include increasing hospital funding, helping more nurses to start working, and adding new doctors and specialists in northern Ontario.

As well, their pledge to increase home care services would cost more than half a billion a year, in addition to spending another approximately $1 billion by the third year on caregiver benefits, a seniors' home safety grant program and boosting personal support worker wages.

The NDP say they would maintain the Tories' overall promised infrastructure spend, but would redirect any money earmarked for Highway 413 and the Bradford Bypass, which they oppose, to school and health-care capital projects.

- with files from Jessica Smith.