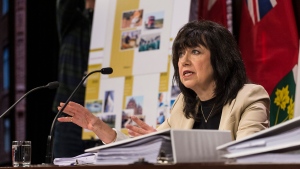 TORONTO - Ontario is not doing enough to verify that people receiving disability benefits are actually eligible, with most approved applications marked “disabled for life” and very few ever reviewed, the auditor general has found.

In her annual report, Bonnie Lysyk said that in the past 10 years, the number of Ontario Disability Support Program recipients has increased by 50 per cent, while the province's population has grown by only 12 per cent.

“There's likely people receiving money that are not entitled to it,” Lysyk said.

Children, Community and Social Services Minister Todd Smith said the ministry is trying to develop smarter ways to identify and prioritize cases for review and confirm eligibility for ODSP benefits.

More than 40 per cent of applicants are confirmed as disabled after only a cursory review of their file, the auditor found. Once applicants are approved, 80 per cent of them aren't subject to any future medical reviews - up from 51 per cent a decade ago - leaving them as “disabled for life,” Lysyk said.

A chart illustrating that figure “shocked the heck out of me,” Lysyk said.

“All of a sudden in '14-15 there's a jump up where now people who are applying for ODSP are determined to be on ODSP for life and hence the significant dollar increases,” she said.

The annual cost of the program has risen by about 75 per cent in the past 10 years to about $5.4 billion, Lysyk said. Over the past four years, the auditor found that the government conducted fewer than two per cent of the eligibility reviews that its own directives say it should.

Kyle Vose, the chairman of the ODSP Action Coalition, said the complex system is stacked against those receiving disability payments, with not enough caseworkers to handle the load.

“I feel like they try to put a lot of blame on the recipients,” he said.

New Democrat John Vanthof said a lot of people are already falling through the cracks in the ODSP system and have a hard time accessing services.

“Nobody is, to me, scamming the system to live far, far below the poverty line,” he said. “You're not getting rich on ODSP. You're barely surviving on ODSP. Very few people willingly go on ODSP.”