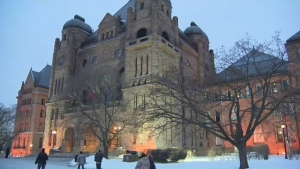 TORONTO - The Ontario government has passed a bill overhauling policing regulations in the province, saying it will strengthen oversight of law enforcement and redefine officers' duties.

Bill 175, dubbed the Safer Ontario Act, passed in the legislature Thursday and offers the first updates to the Police Services Act in more than 25 years.

One of the most significant changes involves expanding the mandates of the province's three police oversight agencies, increasing the scope of what they can investigate and adding extra accountability measures.

The Ministry of Community Safety and Correctional Services says it revised the bill to reflect concerns voiced by police associations when the legislation was tabled last year.

But some of those police associations say they still have qualms about the bill, arguing it opens the door for privatization down the road by strictly defining officer duties and referring others for outsourcing.

Attorney General Yasir Naqvi says the long-sought updates to the province's policing laws - which go into effect in a few months - will give forces the tools they need to do their work in the modern era.

“This bill is very much about strengthening the trust and respect between the police and the communities they serve,” Naqvi said. “The legislation we have passed today ... really sets the framework for modern policing in 21st-century Ontario.”

Many of the changes stem from Appeal Court Justice Michael Tulloch's report on police oversight, which made 129 recommendations aimed at increasing transparency and accountability for the province's forces and the bodies that oversee their conduct.

The new bill requires the Special Investigations Unit or SIU, one of Ontario's three police oversight agencies, to report publicly on all of its investigations and release the names of officers charged.

The three agencies - the SIU, the Office of the Independent Police Review Director (OIPRD) and the Ontario Civilian Police Commission (OCPC) - will also get expanded mandates.

An Inspector General will be established to oversee police services, with the power to investigate and audit them, and Ontario's ombudsman will be able to investigate complaints against the police oversight bodies.

As well, the SIU will have expanded powers to investigate both current and former officers, volunteer members of police services, special constables, off-duty officers and members of First Nations police services.

Police officers who don't comply with such investigations could be fined up to $50,000 and/or be sent to jail for up to one year, a departure from current rules that do not force officers to co-operate with an investigation.

Naqvi characterized the rules as good news for Ontario residents.

“This allows for a more robust conversation between the SIU and the police service they're investigating and making sure they get all the evidence, but they're getting it in a way that is legal in terms of what's allowed under the law and also practical given the circumstances of the case,” he said.

The new legislation also allows suspensions without pay when an officer is in custody or when they are charged with a serious federal offence that wasn't allegedly committed in the course of their duties, bringing Ontario in line with policies in the rest of the country.

The biggest sticking point in recent months was the law's capacity to define police responsibilities. The new bill lays out duties that can only be carried out by an officer, meaning forces could look to outside companies to conduct other functions.

Major police associations said this would pave the way for privatization and lobbied for amendments, some of which were made.

“With the complexity of this bill and the density of the amendments, the rush by this government to pass a bill that remains deeply flawed is an affront to those who believe in parliamentary democracy and leads us to question whether this government has failed to act in the best interest of the public and members of the police sector,” Toronto Police Association President Mike McCormack said in a statement.

The New Democrats also criticized the bill, saying they would like to see it repealed.

“(Ontario Premier) Kathleen Wynne is making the advancement of more robust police oversight and accountability - which we support - contingent on an agreement that they can contract out some public safety and policing to private sector security firms,” said NDP House Leader Gilles Bisson.