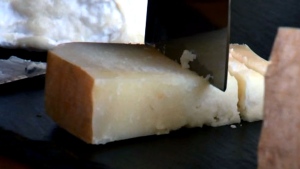 A piece of cheese is seen in this undated file image.

OXFORD COUNTY, Ont. - Police in southern Ontario say they're on the hunt for a man who allegedly made off with $187,000 worth of cheese.

They say a man came to the business and claimed a shipment of cheese that was originally bound for New Brunswick.

But after the man allegedly loaded up a trailer and drove away, reports surfaced that the shipment never arrived at its destination.

Anyone with information on the cheese theft is being asked to come forward.