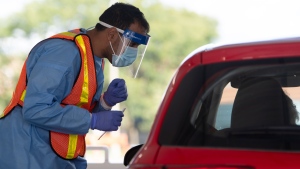 Ottawa Health personnel speak with a driver before administering a COVID-19 test at a drive-through test centre in Ottawa, Friday, September 4, 2020. THE CANADIAN PRESS/Adrian Wyld

Ontario is reporting another spike in COVID-19 cases today with the majority of new infections continuing to come from Toronto, Peel Region, and Ottawa.

Provincial health officials recorded 478 new cases of the virus today, up from the 425 reported one day ago.

This is the highest daily case count in the province since May 2, when 511 new infections were recorded.

Today's data brings the seven-day rolling average to 383, up from 242 one week ago.

More than 34,000 tests were processed over the past 24 hours, resulting in a case positivity rate of 1.4 per cent, up from 1.3 per cent one day earlier.

With 196 new recoveries today, the number of active cases in the province has now jumped to 3,578.

Just one week ago, the number of active cases in the province was 2,157 and throughout August, active infections consistently remained below 1,000.

Another 27 infections were confirmed in the region of Waterloo today along with 27 new cases in York Region.

A count of data from public health units and hospitals on Tuesday found 104 people were being treated for COVID-19 in Ontario hospitals, with the province saying 24 of those patients were in intensive care.

Just last week, fewer than 50 people were hospitalized with COVID-19 across the province, according to centrally-reported data.

Three more virus-related deaths were reported in Ontario today and provincial data indicates that all three were residents of long-term care facilities.

Nearly 70 per cent of all new cases are in people under the age of 40, the province said Tuesday.

"With the number of cases on the rise, it is clear that the next wave, it will come at us harder than the last one," Ford said during a news conference at Queen's Park on Tuesday afternoon.

"It will be more challenging before because the flu season is starting soon and people are heading indoors again."

The Ford government announced today that it has ordered more than five million doses of the flu vaccine as part of its COVID-19 fall preparedness plan to combat a second wave of the virus.

The  flu shot will be distributed to vulnerable populations in long-term care homes, hospitals and retirement homes during the last week of September and it will be made available to the general population sometime in early October, Ontario Health Minister Christine Elliott said.

On Monday, Dr. Barbara Yaffe, Ontario's associate chief medical officer of health, said the spike in new cases can partially be attributed to large gatherings that have been happening around the province.

"When we look more closely at the numbers to determine where these individuals are acquiring the virus, we have seen a few trends emerge. Social events remain an issue. Weddings, house parties and so on contribute to our case numbers," she said.

Over the weekend, concerns over large social functions prompted the Ford government to roll back the size of allowable gatherings provincewide from 100 outdoors and 50 indoors to just 10 people inside and 25 outside.

Yaffe said the province has also seen a rise in workplace infections in recent weeks.

"This does include some in restaurants and bars, although the infection has tended to circulate more often between the staff in the workplace rather than the patrons," she said Monday.

New infections in congregate settings, including schools, are also contributing to the case growth, Yaffe confirmed.

Of those new cases in schools, 26 involved students, seven cases involved staff, and 18 were not identified for privacy reasons.

Ottawa Health personnel speak with a driver before administering a COVID-19 test at a drive-through test centre in Ottawa, Friday, September 4, 2020. THE CANADIAN PRESS/Adrian Wyld