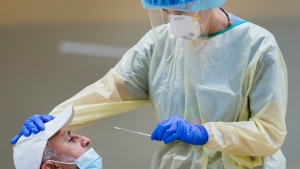 Friaaz Azeez gets tested for COVID-19 from a health care worker at a pop-up testing centre at the Islamic Institute of Toronto during the COVID-19 pandemic in Scarborough, Ont., on Friday, May 29, 2020. THE CANADIAN PRESS/Nathan Denette

Ontario is reporting 987 new cases of COVID-19 today and 16 new deaths, the highest single-day death toll reported in the province in months.

While today's daily case count is down slightly from the record 1,050 new infections that were reported one day earlier, the rolling seven-day average has inched up to 971, up from 886 one week ago.

Virus-related deaths are also on the rise in the province.

Sixteen more deaths were reported in the province today, the highest number of COVID-related deaths confirmed in a 24-hour period since mid-June.

An estimated 28,600 tests were processed over the past 24 hours, which is slightly higher than the 25,000 completed on the previous day but significantly lower than the province's goal of 50,000 tests per day.

The test positivity rate is now 3.5 per cent provincewide.

COVID-19 hospitalizations are also rising in Ontario, with 367 patients currently receiving care in the province's hospitals, up from 357 one day earlier.

Approximately 75 of those patients are in intensive care, up by two from the previous day.

A count of data released by local public health units and hospital networks on Wednesday afternoon found at least 404 people being treated for COVID-19 in hospital across the province.

According to the latest data from the province, the highest number of new cases were reported in Toronto (319), Peel Region (299), York Region (85), and Durham Region (62).

Indoor dining is set to resume and gyms will reopen with stricter public health guidelines in Peel Region, Ottawa, and York Region this weekend and in Toronto on Nov. 14 after the province rolled out a new system for imposing and easing COVID-19 restrictions.

The new system, which was unveiled Tuesday, places each of Ontario’s 34 public health units into one of five different colour-coded categories based on how prevalent virus spread is within their communities and the capacity of area hospitals.

Toronto, Peel, York, Ottawa, and the Eastern Ontario Health Unit will be placed in the orange, or "restrict," category based on the metrics established by the province.

While Ford told reporters Tuesday that his new plan aims to "strike a happy balance" between health and economic considerations, some infectious diseases experts believe the new rules could lead to an increase in COVID-19 infections in the province.

Dr. Isaac Bogoch told CP24 Wednesday that the benchmarks the province has set under the new plan should be "recalibrated."

"You really will allow for a lot of community transmission before any action is taken," he told CP24 on Wednesday morning.

The province's new framework includes a list of thresholds for moving a region into a given category, including one that sets a positivity rate of more than 10 per cent or a weekly incidence rate of more than 100 new infections per 100,000 people before moving an area from the orange to the red category.