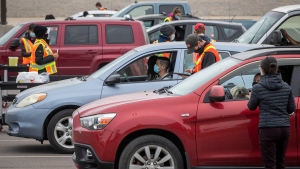 People sit in their vehicles while they wait to receive a COVID-19 vaccine at a drive-thru clinic at Richardson Stadium in Kingston, Ont., on Friday, May 28, 2021. THE CANADIAN PRESS/Lars Hagberg

Ontario reported 1,033 new COVID-19 cases on Sunday along with 18 additional deaths, the lowest overall count of lab-confirmed new cases reported in the province since early March.

The seven-day rolling average of new cases now stands at 1,154, down from 1,248 yesterday.

It’s the lowest overall count of cases since March 6, when 990 new cases were documented across the province.

One of the 18 deaths reported Sunday involved a resident of the long-term care system.

Provincial labs processed 26,565 test specimens in the previous period, generating a positivity rate of at least 4.2 per cent.

The overall hospitalization count was not complete on Sunday, but the Ministry of Health said 614 people were in intensive care on Sunday, down 12 from Saturday.

Ontario’s hospitals are now caring for at least 20 COVID-19 ICU patients from Manitoba, which are included in provincial statistics.

Of the 614 in intensive care patients, 417 were breathing with the help of a ventilator.

A total of 8,744 people have died from novel coronavirus infection since March 2020.

Yesterday, the Ford government signalled that some of the emergency orders enacted during the stay-at-home order will remain in place for some period of time once that order expires on June 2.

As of today, 8.984,278 doses of a COVID-19 vaccine have been administered across Ontario so far, according to the Ministry of Health.

At least 144,000 shots were administered on Saturday.

The Ministry of Health says that 687,894 people have received both a first and second dose and are considered to be fully inoculated against the disease.

People sit in their vehicles while they wait to receive a COVID-19 vaccine at a drive-thru clinic at Richardson Stadium in Kingston, Ont., on Friday, May 28, 2021. THE CANADIAN PRESS/Lars Hagberg