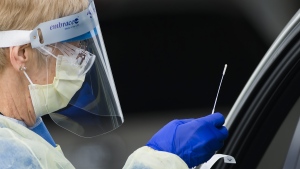 The province is reporting a slight increase in the number of new cases of COVID-19 today after hitting a more than three-month low one day earlier.

Provincial health officials are reporting 111 new infections today, up slightly from the 102 reported on Wednesday.

With 111 new cases reported on Tuesday, 116 on Monday, and 129 on Sunday, the rolling five-day average of new infections now stands at 114.

The number of active cases of the virus continues to drop in the province, with 141 more cases now considered to be resolved.

In Toronto, 30 new cases were reported and 25 new infections were confirmed in Peel Region.

Windsor-Essex saw 15 new cases of the virus and 10 more were reported by York Region Public Health.

The province says 26,492 tests were processed over the past 24 hours, resulting in a case positivity rate of 0.4 per cent, a figure that remains unchanged from the previous day.

“The data is all looking good at this time," said Dr. David Williams, Ontario's Chief Medical Officer of Health, in a press briefing this afternoon. "We’ve haven’t been alerted to anything terribly unusual that makes us concerned at this stage...Of course we could get some outbreaks in some settings.”

The number of virus-related hospitalizations continues to decline in the province, with 107 people now receiving care in hospitals, down from 115 one day prior.

Patients in intensive care also dropped to 26 and of those, 20 are on ventilators.

Five more deaths were disclosed in today’s epidemiological summary, bringing the total number of deaths in the province to 2,737.

The total number of lab-confirmed cases of the virus now stands at 37,163 and only 1,365 of those cases are still considered to be active.

In Thursday's disclosure, one more outbreak was confirmed in long-term care, bringing the number of active outbreaks to 38.

There have been a total of 380 outbreaks in long-term care since the start of the pandemic.