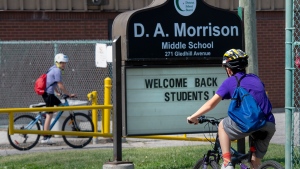 Ontario reported 173 new COVID-19 cases in its schools on Friday, with more than a third of those coming from schools in the Greater Toronto and Hamilton Area.

One-hundred and forty six new cases were detected in students, 26 in school staff and the identities of two other cases were not released.

There are now 1,372 known active cases in Ontario schools, impacting 750 of the province’s 4,844 publicly-funded schools.

One school is currently closed.

At this point in the year last year, there were 214 known active cases in the province’s schools, but the majority of school boards started their year at least one week later than this year.

Cases tied to schools now make up 24 per cent of the province’s known active caseload.

Across the Greater Toronto and Hamilton Area schools reported an additional 65 cases on Friday.

In Peel, there are now 138 active cases across the English Catholic and Public Boards, and 160 classrooms or cohorts have been moved online.

Across the GTA and Hamilton, there were at least 257 classes or cohorts of students self-isolating at home Friday.