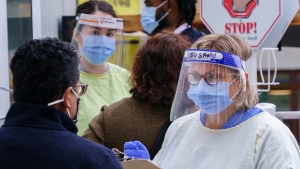 Ontario is reporting a slight increase in the number of new COVID-19 infections with more than 2,700 cases confirmed today but the province's test positivity rate has now dropped to its lowest level in nearly six weeks.

Provincial health officials logged 2,759 new infections today, up from the 2,320 cases confirmed on Wednesday and 2,073 infections recorded on Tuesday.

But the rolling seven-day average of new cases continues to decline.

With 47,638 tests processed over the past 24 hours, the provincewide positivity rate is now 5.7 per cent, the lowest that number has been since April 3.

Another 31 virus-related deaths were confirmed today and the average daily death toll now stands at 27, up by one from last Thursday.

According to data released by the province today, there was little movement in hospitalization and intensive care unit admissions over the past 24 hours.

The province says the number of COVID-19 patients in hospital has declined slightly to 1,632 but the number of ICU patients remains unchanged at 776.

The total number of lab-confirmed COVID-19 cases in Ontario has now surpassed 500,000 and more than 8,400 people have died in the province after becoming infected with the novel coronavirus.

The Ford government has not yet confirmed if it plans to extend a provincewide lockdown and stay-at-home order that is set to expire on May 20.

The restrictions were implemented in an effort to drive down surging COVID-19 case growth in Ontario and the province's health minister has hinted that the stay-at-home order could be in place beyond next week.

Premier Doug Ford is set to make an announcement this afternoon alongside Dr. David Williams, the province’s chief medical officer of health.

Williams said this week that Ontario would need to see daily COVID-19 case counts well below 1,000 before the stay-at-home order could be lifted.

'We want to get to stage one:’ Ontario premier floats idea of entering reopening plan ahead of schedule