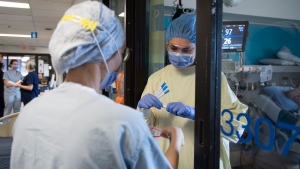 Ontario health officials reported 356 new COVID-19 infections on Thursday, along with a jump in deaths to 45 in one day, which may have been due to a lag in reporting from local public health units.

Recoveries outstripped new cases across the province by 41 on Thursday.

University Health Network epidemiologist Dr. Issac Bogoch said Thursday the curve may not be flattening as quickly as anyone would like, but it is declining.

“Just remember – cases in Ontario used to be 600 to 700 cases each day, now we’re in the 300 to 400 cases each day range. There is very good progress, we’re headed in the right direction. We’ve plateaued unfortunately, but certainly with issues with contact tracing and testing, but those are being resolved.”

Provincial labs processed nearly as many specimens as capacity could allow, turning around 20,800 results in one day.

A further 12,760 specimens remain under investigation.

He said that the high testing rate was contributing to the case growth staying in and around 300 cases per day.

"We’re close to beating the bushes looking for cases – we’re trying to do that even though it may keep up our numbers at the moment – but it will help our case contact management."

A total of 776 people were in hospital due to COVID-19 on Thursday, down 15 from Wednesday.

One hundred and twenty-one of those people were in intensive care, down six from Wednesday.

The number of patients breathing with the help of a ventilator increased to 94, from 92 yesterday.