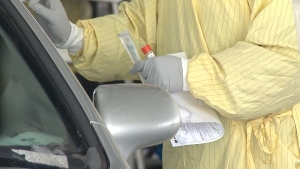 Officials logged 613 new infections on Monday, down from 653 cases on Sunday but up marginally from the 610 cases confirmed one week ago.

The seven-day rolling average of new cases now stands at 621, down from 711 last Monday.

Of the new cases reported today, 454 are in individuals who are not fully vaccinated or have an unknown vaccination status and 159 are in those who are fully immunized.

Just under 30 per cent of Ontario's population has not yet received two doses of a COVID-19 vaccine, including children under the age of 12 who are not yet eligible to be vaccinated. The City of Toronto announced Monday that it has formed a planning group to prepare for inoculating children ages 5 to 11 when a vaccine is approved for that cohort in Canada.

With 22,633 tests processed over the past 24 hours, the Ministry of Health is reporting a provincewide positivity rate of two per cent, down from 2.7 per cent last week.

Provincial health officials say there are currently at least 184 COVID-19 patients receiving treatment in intensive care, up from 177 last Monday.

No new deaths were reported today.

Despite earlier projections that showed a much more dire situation in Ontario this fall, the province has seen the number of new infections reported each day stabilize in recent weeks and on Monday Labour Minister Monte McNaughton said that the province is “doing a heck of a lot better than many jurisdictions within Canada.”

Dr. Isaac Bogoch, an infectious diseases specialist with Toronto General Hospital, also expressed some optimism while speaking with CP24 earlier in the day.

“We are following along the path of certainly a better-case scenario… that’s fantastic news,” he said.

“The other point here is that don’t hold your breath, right? It is only the tail end of September. We’ve got a long fall and a long winter ahead of us. We know there is going to be more and more opportunities for this virus to be transmitted and we’ve got to be careful here.”

He added that Ontario must avoid ending up a situation similar to Alberta, which is seeing a significant strain on its health-care system due to COVID-19.

“I think it is wonderful to see how we are doing in Ontario right now. It’s not amazing but it is also not terrible. If we can hold steady for the time being and carry on along this trajectory for the fall and the winter, we will have done OK,” he said.