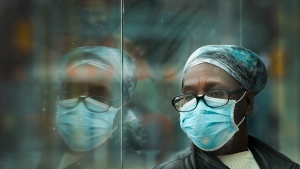 A woman waits for a streetcar in a bus shelter in Toronto on Thursday, April 16, 2020. Health officials and the government have asked that people stay inside to help curb the spread of COVID-19. THE CANADIAN PRESS/Nathan Denette

Ontario reported a seventh straight day of fewer than 100 new COVID-19 infections, with 79 on Sunday, along with two new deaths.

"Locally, 30 of Ontario’s 34 public health units are reporting fewer than five cases, with 18 of them reporting no new cases," Health Minister Christine Elliott said on Twitter.

She said 148 more patients recovered from the virus in the past 24 hours, meaning Ontario's remaining active cases declined by 71.

Officials said a total of 2,786 people have died from the virus since March.

More than 36,279 people have recovered from the virus, with 981 active cases remaining.

The tests generated a positivity rate of 0.28 per cent.

Fifty-six per cent of the newly infected were under the age of 40.