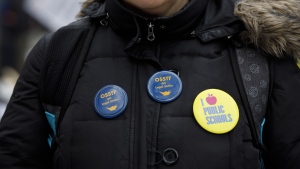 A striking teacher of the Ontario Secondary School Teachers' Federation pickets outside of the Toronto District School Board head office on Yonge St. in Toronto, Wednesday, Dec. 4, 2019. THE CANADIAN PRESS/Cole Burston

Ontario’s English Catholic school board teachers will hold another provincewide walkout next week.

The Ontario English Catholic Teachers' Association (OECTA) has announced that its members will walk off the job for one-day on March 5.

The union had previously cancelled a series of rotating strikes planned for this week amid what it said were “meaningful” discussions with the province. Those talks, however, broke down on Monday with OECTA President Liz Stuart accusing the government of having “no real intention of negotiating an agreement.”

“Our association remains committed to the goal of reaching a fair agreement at the bargaining table. However, we cannot tolerate the Ford government’s penchant for misinformation and mistruth, nor its efforts to dismantle publicly funded education,” Stuart said in a news release announcing the latest job action. “Catholic teachers understand the long-term consequences of this government’s regressive agenda, and we continue to demonstrate our willingness to stand up and make our voices heard. Parents and the public know that we are the last line of defence against the Ford government’s reckless education cuts.”

Stuart said that OECA agreed to suspend the rotating strikes it had planned for this week as a show of “good faith” and a “demonstration” of its commitment to get a deal done.

She said the government, however, continued to “insist on deep, permanent cuts” while “peddling the inaccurate claim that enhancements to our(OECTA’s) benefits plan is the sticking point in bargaining.”

"This week, while in discussions with OECTA, we sought to get a deal that is in the best interests of our students through low class sizes, 100% investment in special education, and protecting full-day kindergarten," Lecce said in a statement. "Yet again, we have seen obstruction to a deal because of an insistence by the union on enhancements to an already generous benefit package."

"Students deserve to be in class. That is why I am calling on OECTA to return to the table to get a deal.”

All four of the province’s teachers’ unions are currently engaged in some sort of job action, including OECTA.

A striking teacher of the Ontario Secondary School Teachers' Federation pickets outside of the Toronto District School Board head office on Yonge St. in Toronto, Wednesday, Dec. 4, 2019. THE CANADIAN PRESS/Cole Burston