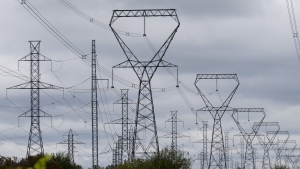 TORONTO - Ontario plans to secure more natural gas generation in order to fuel an expected surge in demand for electricity, the energy minister said Friday, the latest announcement in what critics describe as a scramble in the face of a potential energy shortage.

Energy Minister Todd Smith had asked the Independent Electricity System Operator to explore a moratorium on new natural gas in order to reduce emissions. But while Smith said as recently as six weeks ago he didn't think Ontario needed more gas generation, the IESO has concluded otherwise.

A moratorium won't be possible in the near term, the IESO said Friday in an interim report, but it will likely conclude in its final report due later this year that one is possible after 2027.

Going without new natural gas could lead to rotating blackouts in the next few years, the IESO said.

“It provides flexibility to the system by quickly ramping up and down to meet changes in demand and augmenting the availability of other forms of generation,” the report said.

“As of yet, there is no like-for-like replacement. Operating a system without it requires a careful analysis of how a combination of other forms of supply can provide this level of flexibility.”

Ontario will need to secure up to 1,500 megawatts of new natural gas capacity between 2025 and 2027, and should also procure 2,500 megawatts of energy storage, which works like a battery to inject capacity into the system when it's needed -- for a total of 4,000 megawatts, enough to power the city of Toronto, the IESO said.

Smith has directed the IESO to proceed with that procurement, though for the 2,500 megawatts of non-natural gas generation he said “at least” 1,500 should be storage, while the rest should be other clean sources such as hybrid solar-battery technology or new hydroelectric power.

Over time, natural gas generation can be replaced by storage and other emissions-free solutions, but during a transition period, natural gas is needed to ensure the system is reliable and stable, the report said.

Smith said in an interview that the IESO's conclusion that more natural gas generation is needed is a sign of how quickly the economy is growing.

“The demand that's going to exist, the last thing that we can have is a brownouts or blackouts, because if we don't have that electricity that we need, we're not going to see the uptake in electrification and electric vehicles, which will reduce emissions in other parts of the economy,” he said.

“So, it's really important that we have that steady, reliable, affordable supply of electricity, otherwise, we're not going to see the uptake in new technologies that are electrification based.”

Green Party Leader Mike Schreiner said the Tories should never have cancelled green energy contracts and conservation programs at the beginning of their first term in government.

“What's so frustrating about this is many of us, myself included, were predicting the government was going to run into problems in 2024â€¦if they were going to continue to be hostile to low-cost, renewable energy and energy-efficiency programs, especially when you know electricity demand will start to increase,” he said.

“Now they're scrambling, facing a potential energy shortage, and ramping up polluting higher cost gas plants is really not the way to go.”

The reliance on natural gas means that greenhouse gas emissions from the electricity sector are set to rise in order to support the economy's broader electrification in the name of reducing emissions.

The amount of new natural gas the IESO says Ontario needs in the next few years is expected to increase emissions by two to four per cent over those previous projections.

Chuck Farmer, the IESO's vice-president of planning, conservation and resource adequacy, said the system operator will also look to other solutions to meet electricity supply shortfalls, including more energy efficiency programs and importing power from other jurisdictions.

“This combined effort would ensure that the grid will be able to support a substantial energy storage fleet, which will be essential for the decarbonization of the electricity system,” he said.

Interim NDP Leader Peter Tabuns criticized the government for relying on natural gas and noted that Smith's directive to the IESO says those contracts should go to 2040, and that operators would still get paid if new emissions laws force them to shut down.

An electricity supply crunch is expected in the next several years, with a nuclear plant currently set to be retired, others being refurbished, and increasing demands including from electric vehicles, new electric vehicle and battery manufacturing, electric arc furnaces for steelmaking, and growth in the greenhouse and mining industries.

“Ontario will also lose the interest of businesses which want to use clean electricity, struggle to meet the province's own emissions reduction targets, and will be left with stranded assets as the global norm turns to renewables,” the group said in a statement.

Ontario has recently announced a number of plans aimed at dealing with that supply crunch, though critics accuse the Progressive Conservative government of being caught flat-footed by the need and say this planning should have started long ago.

The province plans to extend the life of Pickering Nuclear Generating station by a year, to 2026, though a decision from the regulator isn't expected until 2024, and is undergoing various rounds of procurements to secure new electricity generation.

It is also planning an import agreement with Quebec in 2026 or 2027 and is rolling out new and expanded energy efficiency programs -- though critics say they won't replace conservation programs the government previously cut.