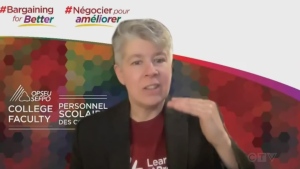 The union representing safety inspectors at the Technical Standards and Safety Authority says the parties have reached a tentative agreement following an 11-week strike.

OPSEU/SEFPO Local 546 says the agreement was reached early Friday, with a ratification vote expected to be held Saturday -- which, if passed, would end the strike.

The 170 union members -- who inspect elevating devices, boilers and pressure vessels, and fuels throughout the province -- walked off the job in July after months of failed negotiations.

JP Hornick, the union's president, says the inspectors are “stronger than ever” and the tentative contract will set the foundation for future bargaining.

Bonnie Rose, president and CEO of TSSA, says negotiators worked “tirelessly for months” to reach the agreement and she is looking forward to welcoming inspectors back.

Key issues in the negotiations included wages, benefits, understaffing and improved accountability for public safety standards and practices from the TSSA.