Ontario schools will not reopen on April 6, Ford says 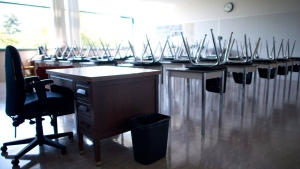 Premier Doug Ford says that schools will not be reopening on April 6, as previously planned.

Back on March 12 the province announced the closure of all schools through April 3 but on Monday afternoon Ford confirmed that the closure will be extended indefinitely amid a COVID-19 outbreak that has brought public life to a standstill.

The announcement came on what would have been the first day of classes following March Break.

“I know the minister will be rolling out more comments over the next day or two but the reality is that April 6 is not realistic right now,” Ford said in response to a reporter question. “We are in a state of emergency, we are making sure that people are safe and the number one priority right now is making sure our kids are safe.”

Ford did not indicate when schools might be able to reopen, noting that the situation is “changing hour-by-hour, day-by-day.”

The news of the indefinite closure comes one day after Education Minister Stephen Lecce wrote an open letter to public school parents, advising them that the government was looking at ways that coursework could be continued in the event of an extended closure.

The government has already said that it will launch a new “Learn at home” online portal, which includes access to resources from TVO for elementary students and an online tool with course offerings for secondary schools students.

“Although publicly funded schools are ordered closed until April 6, the fluidity of developments around COVID-19 means we are preparing in the event the closure period is further extended,” Lecce wrote in the letter. “Specifically, we are working to ensure that students will be able to continue their coursework and credit accumulation, even when we aren't able to be in a classroom setting.”