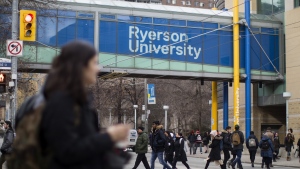 A general view of the Ryerson University campus in Toronto, is seen on Thursday, January 17, 2019. (THE CANADIAN PRESS/Chris Young)

TORONTO -- Ontario is seeking to appeal a court ruling that struck down its directive making some post-secondary student fees optional.

The Ontario Divisional Court said the so-called Student Choice Initiative interferes with the functions and independence of universities and college campus organizations.

Campus organizations such as student unions, newspapers and radio stations, food banks and LGBTQ support centres have had to lay off staff or reduce services because they received less funding this year due to the opt-out provisions.

Ryerson University's campus newspaper The Eyeopener said nearly 56 per cent of full-time students chose not to pay $5.65 to help fund it.

The Student Choice Initiative was announced in January, at the same time as a 10-per-cent cut to tuition and a cutback on the Ontario Student Assistance Plan.