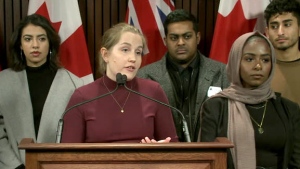 TORONTO - Student groups who won a court challenge against the provincial government say they hope funding to campus organizations can be restored as soon as possible.

“The impugned directives are not authorized by law and are inconsistent with the autonomy granted universities, bedrock principles on which Ontario universities have been governed for more than 100 years,” the three-judge panel wrote.

The ruling makes a distinction between universities and colleges, saying that while the government can issue directions to colleges, those directions can't interfere with student associations' “normal activities.”

Kayla Weiler, the Canadian Federation of Students' Ontario representative, said she is unsure if the fee schedule and full funding for those groups can resume for next semester or next year.

“We're hoping the fees will go back into regular collection as soon as it's possible,” she said. “I think of particularly food banks and how they're unable to budget for the upcoming semester because of the Student Choice Initiative.”

Campus organizations such as student unions, newspapers and radio stations, food banks, clubs and LGBTQ support centres have had to lay off staff or reduce services because they received less funding this year due to the opt-out provisions.

Ryerson University's campus newspaper The Eyeopener said nearly 56 per cent of full-time students chose not to pay $5.65 to help fund it.

A spokeswoman for Attorney General Doug Downey said the ruling is being reviewed.

“As this matter is in the appeal period, it would be inappropriate to comment,” Jenessa Crognali said in a statement.

The government has said the goal of the initiative was to give students more control over how they spend their money.

But the CFS has called it an attempt to silence voices that hold the government accountable, such as student unions and campus media. They point to a Progressive Conservative fundraising email from Premier Doug Ford, in which he bemoaned what he called “crazy Marxist nonsense” from student unions and said he “fixed that” by making student union fees optional.

The judges wrote that Ford's comments weren't relevant to the decision since they were not deciding issues of improper purpose or bad faith, but they noted that nowhere else did the government explain why some fees such as athletics were deemed essential and exempt from the opt-out, while others such as student union fees were “non-essential.”

The court ordered the government to pay the students $15,000 for their legal costs.

NDP critic Chris Glover said the government should foot the bill for the funding shortfalls being experienced by campus services such as food banks and equity organizations.

The Student Choice Initiative was announced in January, at the same time as a 10-per-cent cut to tuition and a cutback on the Ontario Student Assistance Plan.