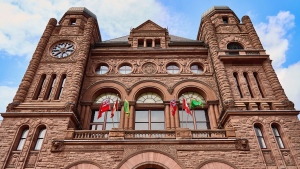 The Ontario government may have to pay around $8 billion if a court challenge launched by public workers lands in favour of the workers, a new report estimates.

The constitutional challenge of Bill 124, which capped public sector salary increases to one per cent for three years, began in early September.

If the court decides in favour of the province and Bill 124 goes unchanged,the Financial Accountability Office (FAO) says the province stands to save about $9.7 billion in salaries and wages from 2019 through to 2025-2027 from both unionized and non-unionized employees.

However, if the province loses the court challenge, the FAO says they could be asked to pay an additional $8.4 billion in salaries over a five-year period, including an estimated $2.1 billion in retroactive payment for 2022-23.

The FAO estimates that about 70 per cent of unionized Ontario public sector employees have either completed or are under an existing collective bargaining agreement subject to wage restraints under Bill 124.

Bill 124 is being challenged in court by based on claims that it violates the Canadian Charter of Rights and Freedoms by impacting meaningful collective bargaining.

Groups representing hundreds of thousands of workers argue the legislation is also impacting staffing shortages, particularly in the health-care sector.

The province, meanwhile, says Bill 124 does not infringe on charter rights, calling the measures “exceptional and time limited.”

The FAO found that vacancy rates have risen across most public and private sector job categories, but that they're “most pronounced in the health-care sector.”

It found that in the second quarter of 2022, almost nine out of every 100 nursing and residential care jobs were vacant. The FAO says this is more than double the vacancy rate from 2019.

“This suggests that the province will have difficulty staffing existing positions and hiring to meet new program commitments,” the report says.

Ontario hospitals have struggled with staffing shortages throughout the summer, with multiple facilities forced to close emergency departments or divert care elsewhere.

The FAO estimated that Ontario will need to increase staging levels by 56,974 employees to “maintain existing programs and meet expansion commitments in hospitals.”

The province will also need to hire more than 81,000 employees by 2026-27 to meet its expanded commitments in long-term care, home care and child-care, the report projects.

The report found that while the province has implemented a number of measures to fill vacant positions, it may still need to increase wages to ensure sufficient staffing.

Between 2011 and 2021, the average annual salary of a public sector employee in Ontario increased by about 1.6 per cent per year, which is lower than the rate of inflation—averaged at about 1.8 per cent per year over the same time period.