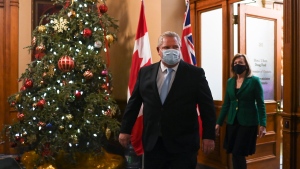 An Ontario-wide lockdown to curb the spread of COVID-19 will now take effect on Boxing Day rather than Christmas Eve and will force even more retailers to suspend in-person shopping.

Premier Doug Ford made the announcement at Queen’s Park on Monday afternoon following a series of emergency meetings over the weekend.

The order will require non-essential retail stores in all 34 of Ontario’s public health units to switch to curbside pickup only as of 12:01 a.m. on Dec. 26 and a swath of other businesses, including gyms and personal care services, to close entirely. The list of retailers that are deemed essential has also been narrowed and will no longer include hardware stores and pet stores, which will only be able to provide curbside pick up.

Discount and big box retailers that sell groceries will be permitted to continue offering in-person shopping during the lockdown period but they will face even stricter capacity limits than the ones already in effect in lockdown zones – 25 per cent versus 50 per cent.

Meanwhile, schools in southern Ontario will switch to remote-only learning for a period of time after the holiday break. Elementary schools will be closed until Jan. 11 and secondary schools will be closed until Jan. 25. Childcare centres will remain open for the duration of the lockdown period, however they will be prohibited from serving school-aged children for the period of time in which elementary schools are operating virtually (Jan. 4 to Jan. 8).

Chief Medical Officer of Health. Dr. David Williams has also updated his advice to Ontarians and is now urging anyone returning to the province from elsewhere in Canada during the shutdown period to self-isolate for a period of 14 days.

What is open and closed under Ontario-wide lockdown

“This difficult action is without a doubt necessary to save lives and prevent our hospitals from being overwhelmed in the coming weeks,” Premier Doug Ford said in making the announcement. “Make no mistake thousands of lives are at stake right now. If we fail to take action now the consequences could be catastrophic and as premier it is my duty to act.”

Modelling had warned that ICUs will be overwhelmed

The new restrictions comes in the wake of the release of modelling, which warned that the number of COVID-19 patients in intensive care units at Ontario hospitals will exceed 300 within the next 10 days in all scenarios and could hit 1,500 by mid-January under the worst-case scenario.

Speaking with reporters, Ford described the lockdown as a “temporary, one-time measure” in response to “exceptional circumstances.”

Once the lockdown goes into effect it will limits bars and restaurants to takeout only in the parts of the province that were not previously under a lockdown order.

For Toronto businesses, things will remain mostly the same but it does dash any hopes of restrictions being lifted in the coming days or weeks

“Today’s announcement is absolutely devastating especially for small businesses and restaurants,” Paramount Fine Foods CEO Mohamad Fakih told CP24 during a subsequent interview on Monday afternoon. “I had hoped that we would see a more comprehensive set of restrictions including like treating fairly at least the small businesses versus how they are treating the big box stores (that are allowed to remain open). Well we don’t see that still. There is no scientific explanation as to why they are doing that.”

Five regions were already under lockdown

Toronto, Peel Region, York Region, Windsor-Essex and Hamilton were already under lockdown orders and an additional nine regions, including Halton and Durham, were in the next most restrictive category.

Nonetheless there had been calls in recent days for a more comprehensive lockdown amid reports of large crowds of holiday shoppers at malls and stores in some regions.

On Monday morning just prior to the announcement CP24’s chopper captured footage of hundreds of shoppers moving around the Toronto Premium Outlets shopping complex in Halton Hills, which had been permitted to remain open with capacity limits due to Halton Region’s designation as a red zone.

“Public health officials have been clear that this kind of hard lockdown is needed to stop the spread of COVID-19. This kind of strong stand against the virus is needed to save lives and to protect the health of each and every one of the residents of our city and our province,” Toronto Mayor John Tory said during a briefing later on Monday afternoon. “Left unchecked this virus could make it impossible for you or a loved one to receive proper care should you fall ill with a stroke or a heart attack or be involved in some kind of a mishap over the holidays. The strain on the system could make it impossible for you to get proper care. We must not let ourselves get to that point and let’s be honest that is where we are absolutely headed absent tough medicine like this.”

The Progressive Conservative government has mostly resisted taking province-wide action, often arguing that the conditions vary considerably in different regions of the province.

But on Monday the premier acknowledged that “province wide action is needed” to reverse alarming trends in terms of case counts and hospitalization rates and said he would rather encounter a small business owner that needed assistance to stay open while out “door knocking” than “people who lost a loved one because of COVID and because we didn’t act quick enough.”

The pivot comes one day after dozens of GTA hospitals released an open letter calling on the Ford government to introduce tougher lockdown measures.

“While we have different parts of the province that have low rates at the moment it doesn’t mean they have a whole bunch of immune people in the community,” Chief Medical Officer of Health Dr. Williams warned during Monday’s press conference. “It can explode at any time with the introduction of super spreaders and other materials so we want to make sure that doesn’t occur.”

The province wide lockdown order will also result in the closure of ski hills, which were previously permitted to operate with restrictions.

A number of industries that were ordered to shut down during the first wave of the pandemic in the spring will be allowed to continue to operate, including construction and film and television production.