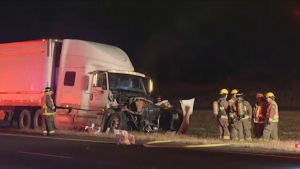 A 54-year-old Welland man is dead following a wrong-way collision on Highway 406 near St. Catharines overnight.

The crash occurred in the southbound lanes of the highway near Beaverdams Road at around 1 a.m.

OPP Sgt. Kerry Schmid said a vehicle heading in the wrong direction collided head-on with a transport truck in the area.

The driver of the passenger vehicle was pronounced dead at the scene and the truck driver sustained minor injuries.

The circumstances surrounding the crash are still under investigation and Schmidt said police are looking into all possible contributing factors, including speed, alcohol, and drugs.

“The collision was significant,” Schmidt said. “(It was a) very horrific investigation here for officers.”

Schmidt said shortly before the collision occurred, Niagara Regional Police received call about a person who had left a local hospital in a vehicle matching the description of the one involved in the crash.

“We have notified the family of the deceased and we are looking at the connection as to whether or not there was any relationship between the call from hospital to the collision that occurred a short time later,” Schmidt said.