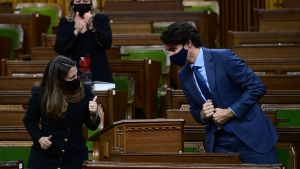 Finance Minister Chrystia Freeland gives the thumbs up to Prime Minister Justin Trudeau after she delivered the federal budget in the House of Commons in Ottawa on Monday April 19, 2021. THE CANADIAN PRESS/Sean Kilpatrick

OTTAWA - Federal opposition leaders are criticizing the Liberal government's first budget in two years for omitting pharmacare, failing to adequately boost old age security and not speeding up the pace of vaccinations.

Debate began in the House of Commons Tuesday with leaders pushing to shape the economic blueprint more to their liking.

He said another commitment the NDP made first is the $15 federal minimum wage.

Despite his criticism, Singh has said he won't do anything that would send the country into an election, as provinces deal with a deadly third wave of COVID-19, driven by more transmissible strains of the virus.

The Liberals need the support of at least one federal party for the budget to pass in the minority Parliament.

Singh cast doubt on whether Prime Minister Justin Trudeau's government will deliver on its child care pledge since the Liberals have been promising to improve the system since the 1990s.

“How can Canadians believe them now?” Singh asked in the House of Commons.

Pharmacare is another piece missing from the 2021 spending plan, the NDP leader said, arguing the Liberals chose to please “Big Pharma” over working families despite commitments to making it happen.

“I would say that this Liberal budget is the best budget we could have had for 2015,” said NDP MP Charlie Angus.

“In 2015, the New Democrats ran on child care and the Liberals ridiculed us. $10-a-day child care, they thought was so ridiculous â€¦ now they understand the wisdom of it.”

As the official Opposition, the Conservatives put forward an amendment to the budget and the Bloc Quebecois, as the third-largest party, proposed a sub-amendment.

Neither contained an explicit statement of non-confidence, although both leaders have said their parties are prepared to vote against the budget.

Conservative Leader Erin O'Toole criticized Trudeau for having long promised child care, but not bringing it to provinces for consultation.

“The Liberal Party of Canada has promised a national daycare plan nine times. Even cats only have nine lives.”

“I think Canadian families, particularly in a pandemic, want certainty and want flexibility, particularly with more families that may have partial work at home, needs where they can rely on families or others,” he said Tuesday.

His finance critic, Ed Fast, asked the House of Commons in his motion that the budget be revised to focus on speeding up Canada's vaccination campaign to defeat the current spread of COVID-19, as well as policies that guarantee jobs and economic growth.

The motion also took aim at the “half a trillion dollars in new debt,” which Conservatives say will have to be paid for through higher taxes, and the Liberals not ruling out the introduction of capital gains taxes on the principal residences of Canadians to cover its spending.

Bloc Leader Yves-Francois Blanchet brought forward a sub-amendment to redress what it sees as two “unacceptable omissions” in the budget, the first being the failure to accede to premiers' demand for an additional $28 billion each year in health-care transfer payments, which he called a “slap in the face” to Quebec and other provinces.

The second deals with what Blanchet says is a failure to provide increased old age security benefits for all seniors, the group most devastated by the novel coronavirus.

The budget actually promises a 10 per cent hike in old age security for Canadians 75 years of age and over. But the Bloc wants that increase to apply to all seniors as of age 65.

“I don't know what planet the prime minister lives on, but in our riding offices all people have been talking to me about is â€¦ these people who are between 65, but not 75 yet, who are furious,” Blanchet told parliamentarians in French.

“They've really, really peeved - that's the word that I'll use since I can't use something stronger.”

As for provincial health-care transfers, the budget reiterates a federal announcement in March that promised a $4-billion one-time top-up, but does not include any extra long-term spending.

Votes on the amendment and sub-amendment will come later in the week and, depending on their wording, could be deemed a test of confidence in Trudeau's minority Liberal government.

While the opposition parties proposed their own budgetary fixes, Trudeau and his finance minister, Chrystia Freeland, launched a full-court press to sell the budget, as written, to Canadians.

“This budget lays out a plan for good, middle-class jobs and a clean, resilient economy that works for everyone,” Trudeau told a news conference.

“From creating a million jobs by the end of the year, to ensuring $10-a day child care in five years, to reaching net-zero emissions in less than 30 years, it all comes down to this: good jobs, a strong and fair economy and a healthy environment.”