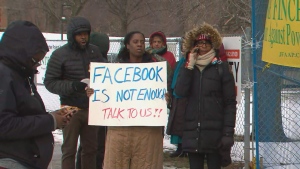 For the second day in a row, a rally was held in support of tenants of 235 Gosford Boulevard, who became displaced following last month's five-alarm fire.

Dozens gathered outside the building on Sunday to voice their frustrations about the underwhelming effort by the landlord, Ronkay Management.

Rally organizers made several demands to the management, including no rent payments till reoccupation, accountability and transparency, stable housing during displacement, and financial support for transportation and food.

They also want the Ontario Fire Marshal to release the official cause of the fire and demanded the city and other local politicians to step up and support the tenants.

The North York highrise has been closed since the Nov. 15 fire that killed one person and injured six others. The building was deemed unsafe in the aftermath of the fire, displacing around 700 people.

Some of the tenants were housed in a shelter set up by the city at York University for two weeks before arrangements were made to transfer those without alternative accommodations to a nearby hotel.

Several attendees of the rally were carrying signs telling the landlord to come and talk to them in person instead of communicating through Facebook.

"Face us, not Facebook," one of the signs read. "Facebook is not enough. Talk to us!" read another.

The management has been updating the residents mainly through a Facebook page.

In a post titled "235 Gosford – Fire restoration status for residents", Ronkay Management said that they are hoping to have residents back in their apartments "sometime in the new year."

"Everyone who has requested housing has been provided with temporary accommodation and those who chose to find their own housing solution have received a transition payment equal to their December rent," the post reads.

Larissa Bablak, a tenant at 235 Gosford who attended the rally, said that the last month has been "confusing."

"It's been really difficult to try to organize what's going to be the next steps," Bablak said, speaking outside of the now-vacant building.

"Trying to make plans for later on is really difficult because you don't know where you can put all your stuff. Where am I going to settle down? When can we start making plans to have a more stable outlook for what's going to happen tomorrow?"

Maija Duncan said this weekend's protests was a way to express the mounting frustration that her fellow tenants feel toward the insufficient action by the landlord.

"We should be able to call them up and get a straight answer," Duncan said.

Another resident who attended the rally said management has not followed through on their responsibility to the tenants. He said the management has not given them any concrete, specific information, especially on when the building could be reoccupied again.

"I hope that maybe the Christmas spirit will take over, and they'll find it in their hearts to actually do the right thing for the people here."