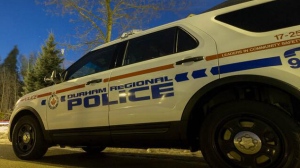 A 39-year-old Oshawa man is facing 15 charges after he asked an acquaintance for a ride and then allegedly stole his car at gunpoint on Tuesday.

At about 3:20 p.m. Tuesday, Durham Regional Police were called to Maple Grove and Nash roads in Clarington for a report of a carjacking.

The suspect directed the driver to take him to a dead-end in Clarington, where he allegedly drew a firearm and stole the vehicle, stranding the driver.

A short time later, officers were called to Waverly Road in Oshawa for a report of a suspicious vehicle.

A search warrant was executed on the home and the suspect was arrested without incident.

A black pellet gun, a crossbow and a loaded flare gun were allegedly found inside the home.

A suspect identified as Christopher Vella was charged with robbery using an imitation firearm, pointing a firearm, theft of a motor vehicle and several other offences.

He was held in custody pending a bail hearing.