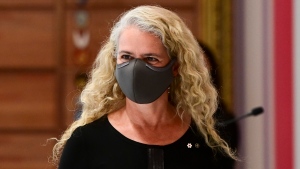 Governor General Julie Payette takes part in a swearing in ceremony at Rideau Hall in Ottawa on Tuesday, Aug. 18, 2020. An Ottawa-based consulting firm with a history of reviewing allegations of workplace harassment on Parliament Hill is being tasked to do so again at Rideau Hall. THE CANADIAN PRESS/Sean Kilpatrick

OTTAWA - An Ottawa-based consulting firm with a history of reviewing allegations of workplace harassment on Parliament Hill is being tasked to do so again at Rideau Hall.

The Privy Council Office says it has hired Quintet Consulting Corp. to conduct a third-party investigation into allegations of a toxic work environment at the office of Gov. Gen. Julie Payette.

Quintet has a standing offer with the federal government to investigate complaints of workplace harassment.

The company was once called in seven years ago to probe issues within the RCMP protective unit for then-prime minister Stephen Harper and more recently investigated problems with former senator Don Meredith.

An online notice says Quintet is to interview current and former employees in the office of the Governor General so they can share their experiences.

Payette will also get a meeting with the consultants as they try to determine precisely what behaviours create concerns of a toxic workplace, and who was involved.

Anyone who previously worked or still works for Payette can take part voluntarily, the notice says, but some of the information they provide could require their identities to be disclosed.

CBC reports have alleged that Payette has belittled and publicly humiliated employees, reducing some to tears or prompting them to quit. Previous issues with the work environment at Rideau Hall were raised in employee reviews reported on by Maclean's magazine.

The more recent reports prompted the Privy Council Office to launch a workplace review, which Payette herself welcomed in a statement that added she was “deeply concerned” about the allegations.

Quintet Consulting's final report is expected to land later this fall on the desk of Intergovernmental Affairs Minister Dominic LeBlanc.