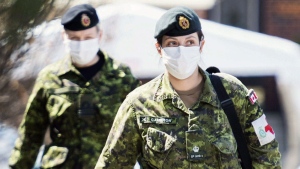 More help is on the way for a First Nation gripped by an outbreak of COVID-19 in northern Ontario, Prime Minister Justin Trudeau pledged Friday.

Canadian Rangers, nurses and paramedics have already been sent to Kashechewan First Nation, where roughly 200 people are infected with COVID-19 - more than half of whom officials have said are under the age of 12.

“Alongside the community, they've worked very hard to keep people safe, but even so, cases remain far too high,” Trudeau said. “That's why we're approving additional support from the Canadian Armed Forces for Kashechewan First Nation.”

As of Friday, Indigenous Services Canada said 14 Canadian Rangers and 13 members of the Canadian Armed Forces were in the community to deliver essential supplies and food and install temporary structures.

The federal department has also sent 17 nurses and four paramedics to the community, while the Weeneebayko Area Health Authority has sent three nurses, two doctors and two mental health workers.

The army will remain there “until at least the end of the month,” Trudeau said.

The prime minister made the announcement Friday morning from his home, where he's self-isolating after returning from the G7 summit in the U.K.

Kashechewan Chief Leo Friday did not immediately respond to a request for comment on Friday, but said earlier in the week that help has been too slow to arrive.

“Nobody seems to do anything about it,” he said on Wednesday. “The process of their help is really slow even though we called a state of emergency.”

The medical officer of health in the Porcupine Health Unit, which includes Kashechewan, said she's focused on trying to prevent the contagious Delta variant of COVID-19 from reaching the remote community.

Dr. Lianne Catton said she's doing that by preventing the spread of that variant in other parts of the public health unit.

“I need to extend our thoughts, our concern, our team's constant partnership and support of the communities in the James and Hudson Bay region, and at this time especially Kashechewan,” she said.

The health unit has remained in lockdown due to high caseloads of COVID-19 even as the rest of Ontario began reopening.

Catton said the health unit is now considering easing restrictions next Friday, though she said that could be tricky for Kashechewan.

“Historical trends of overcrowding and other challenges really impact the risks of a pandemic and of infections like COVID-19 for the community,” she said.