Pace of housing starts edges up in November on strength in B.C., Alberta 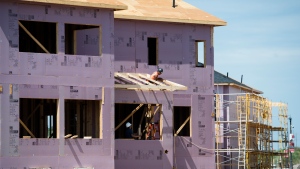 New home construction takes place in a development in Oakville, Ont., on Thursday, August 15, 2019. Canada Mortgage and Housing Corp. says that the pace of housing construction starts increased marginally overall last month compared with October, although there were declines in five provinces. THE CANADIAN PRESS/Nathan Denette

The national housing agency says the seasonally adjusted annual rate for November was 201,318 units, up 0.3 per cent from 200,674 units.

CMHC says the six-month moving average of monthly seasonally adjusted rates was 219,047 units, up from 218,253 units in October.

The pace of urban starts in November increased by 0.4 per cent to 188,559 units, on a seasonally adjusted annualized basis, while the rate of rural starts was estimated at 12,759 units. Within urban areas, the rate of starts for multiple-unit dwellings was up 2.3 per cent at 141,753 units, while the rate for single-detached units fell 5.1 per cent to 46,806.

Ontario was one of the provinces to see the pace of starts fall in November, dropping to 60,960 from 70,229. Other declines were seen in P.E.I., Quebec, Manitoba and Saskatchewan.