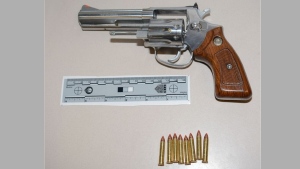 A young man and woman are facing weapons charges after allegedly leaving a loaded gun in a ride-share vehicle.

According to police, the man and woman – both 19 years old – were picked up a ride-share vehicle in the Dufferin Street and Eglinton Avenue West area on Aug. 23.

They loaded several bags into the car, but forgot one when they exited the vehicle.

According to police, the bag contained a loaded handgun, additional ammunition and an undisclosed quantity of cash.

The two were subsequently arrested by police.

Kingsley Dowrin and Vanessa Cosentino are each facing a list of weapons-related charges.

The two made a court appearance Saturday.