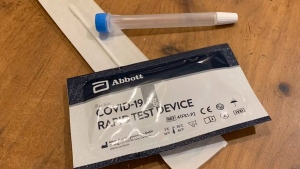 TORONTO -- Science experts advising Ontario on the pandemic are set to release new recommendations on rapid testing, with one of the group's leaders saying it makes sense to use the tests more often.

Dr. Peter Juni, the scientific director of Ontario's COVID-19 Science Advisory Table, said the group plans to publish a science brief on the issue Wednesday. The group's communications director later said it would be published in the coming days.

There have been growing calls for the tests to be made more widely available as COVID-19 cases rise. While it's still unclear how they perform with the new Omicron variant, Juni said they are effective with the Delta variant that accounts for the bulk of Ontario's cases.

"It makes sense from a scientific perspective to use rapid tests more frequently, for example, schools, in workplaces, in congregate settings, and to make rapid tests more available in this province," Juni said in an interview.

Opposition legislators have been calling for the province to distribute rapid tests more broadly, particularly in schools.

Rapid tests are currently offered for free to businesses, and also sold in some pharmacies for asymptomatic people who have not been in contact with a confirmed case.

They have also been distributed in schools in areas of high transmission for students with COVID-19 symptoms or considered a close contact of a confirmed case. The government has also said it plans to send all students home with five rapid tests over the December holidays.

But aside from that holiday plan, rapid tests have not been made available to all students, though families across the province have sought access to them.

Health Minister Christine Elliott said Tuesday that Ontarians have access to some form of COVID-19 testing for free in most cases.

"The only time we're really asking people to pay for tests is if they need it for purposes of travel, which I think is fair," she said.

Ontario offers free PCR testing to those with COVID-19 symptoms, close contacts of a case and members of certain groups. Those tests are available at assessment centres and pharmacies, among other locations, and the province says most results are ready in 48 hours.

Results from most rapid tests are available in about 15 minutes, according to the province.

A spokeswoman for the minister said the province currently has 5.75 million rapid antigen tests in its inventory, and as of Nov. 29, has handed out 33.35 million.

Ontario has been distributing about a million tests each week and is ramping up during the holiday period, Alexandra Hilkene said. That includes 11 million tests earmarked for public and First Nation schools and tests that will be sent to pop-up sites in higher-risk areas, she said.

Ontario's top doctor, Dr. Kieran Moore, said the province is working with the federal government to broaden its testing strategy, and expects to make an announcement on the increased availability of tests in the coming weeks.

Liberal Leader John Fraser said more rapid tests should be handed out, particularly in the winter months, which have typically seen infections rise.

NDP Leader Andrea Horwath said Monday the tests should be free for everyone.

"Nobody should have to pay for a rapid test. That should be part of our public health-care system," she said.