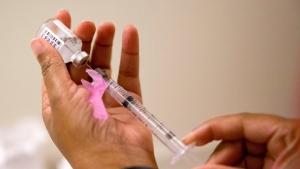 A nurse prepares a flu shot at the Salvation Army in Atlanta on Feb. 7, 2018. A new study from the University of British Columbia suggests the COVID-19 pandemic may be motivating more parents to get their children a seasonal flu vaccine. THE CANADIAN PRESS/AP, David Goldman

VANCOUVER - A new study from the University of British Columbia suggests the COVID-19 pandemic may be motivating more parents to get their children a seasonal flu vaccine.

Published in the Journal of Pediatrics last week, the study surveyed 3,000 families from Canada, the United States, Japan, Israel, Spain and Switzerland.

The researchers found that 54 per cent of parents planned to vaccinate their children - up 16 percentage points from the previous year.

The study determined parents were more likely to get their child the flu shot if they thought there was potential for the child to catch COVID-19, and if their child was already up-to-date on other vaccinations.

Dr. Ran Goldman, the study's lead author, notes that public health officials around the world are concerned about the potentially harmful combination of COVID-19 and flu season.

In a phone interview with The Canadian Press, Goldman says immunizing children will be “critical” in protecting the population from both infections.

He said his team was “very encouraged” by the results of the study, but still would like to see a slightly higher proportion of parents willing to give their children the flu shot.

Goldman said the magic threshold for a vaccine to be highly effective is about 70 per cent.

Although he believes that goal can be reached, Goldman said the media and the scientific community must work harder to help dispel myths and disinformation about vaccine use.

“Vaccination is the world's greatest public health achievement,” Goldman said, stressing the impact vaccines have had on global mortality rates over the last century.

This report by The Canadian Press was first published August 13, 2020.