The owner of a well-known Middle Eastern food chain is demanding the Ontario government to reverse its decision and allow dine-in services in some hot spots after provincial data revealed that the majority of outbreaks in those areas are not linked to restaurants and bars.

On Thursday, the Ford government's official modelling table provided three different scenarios for the second wave of COVID-19 in the province.

The report included data regarding the source of outbreaks in the four regions under a modified version of Stage 2.

Ontario government banned indoor dining and closed facilities like gyms and movie theatres in Toronto, Ottawa, Peel, and York earlier this month to curb the spread of COVID-19.

However, according to the data released on Thursday, restaurants and bars in Ottawa, Peel and York only accounted for two per cent, three per cent, and eight per cent of all outbreaks in their areas, respectively, between August and October.

During that period, most outbreaks were reported in schools, child-care centres, and long-term care homes. 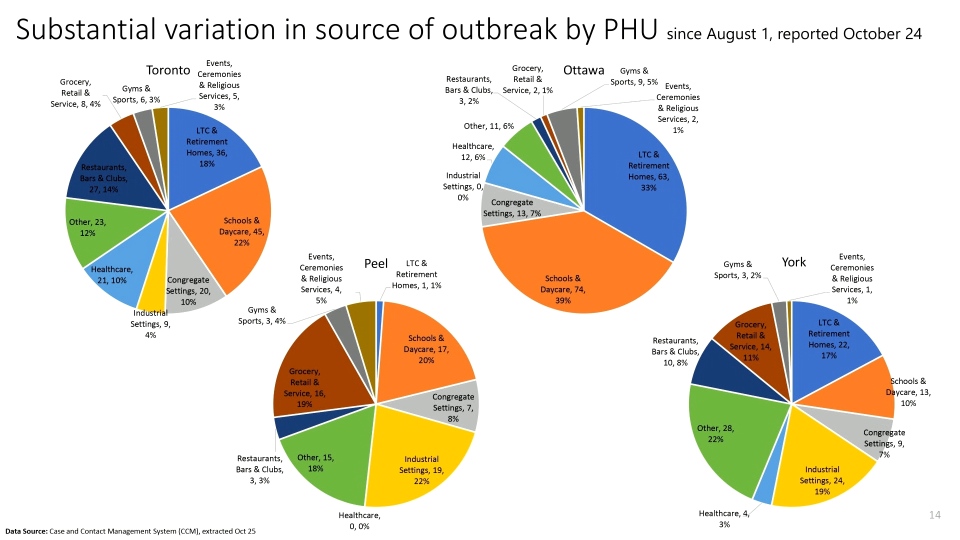 Speaking to CP24 on Thursday night, Paramount Fine Foods CEO Mohamad Fakih said he is shocked to find out about the data, saying that many restaurants agreed to comply with restrictions, not only because owners want Ontarians to be safe, but also because many trusted that officials are making decisions based on the numbers.

"It makes me wonder if the Ontario government has any idea what it's doing. We were promised a data-based approach," Fakih said.

He said it is unbelievable that they shut down restaurants in places like Peel and Ottawa even though those establishments were not the problem.

"The provincial government needs to start doing a better job tailoring the closures to where cases are actually coming from. Surely that should be the whole point of restrictions," Fakih said.

"Destroying people's businesses, taking away that livelihood and killing their jobs is exactly the opposite of looking after the little guy, no matter what the premier says."

When asked why restaurants and bars were closed in those four regions, health officials said those establishments are considered "social settings."

"We were picking those settings where it's indoors, where people are unable to mask for long periods of time," Ontario Chief Medical Officer of Health Dr. David Williams said.

Williams added that facilities such as schools and long-term care homes have "proper steps and (personal protective equipment) in place."

Adalsteinn Brown, the co-chair of the Ontario COVID-19 Science Advisory Table, said the data is "complicated."

"The variation in the source of outbreaks across those four public health units that had restrictions reasonably showing us that there's not one consistent pattern," Brown said.

"There's often concern that we need to wait to see outbreaks in a particular public health unit before instituting restrictions. That would be akin to waiting to close the barn door until after the horses left."

Meanwhile, Brampton Mayor Patrick Brown said the data confirms what he's been saying for quite some time that restaurants are not the source of COVID-19 spread.

"Restaurants were doing their job. They were following the advice of public health," Brown said in an interview with CP24.

While the provincial data suggests that only three percent of outbreaks in Peel were traced back to the hospitality industry, Brown said the region's medical officer of health, Dr. Lawrence Loh, informed him that there hadn't been a single case in a restaurant setting.

The mayor said it shows that the data does not support tightening restrictions in restaurants and bars especially in his region.

"I do hope that once this 28-day period is over, that we can get these small businesses back and open," Brown said. "Small businesses are the lifeblood of our economy, and our restaurants are really hurting right now."

Peel was moved back to Stage 2 because there were concerns that Toronto residents would dine in the region, but Brown said the province could have been more surgical.

"If the data supports it, then yes, shut it down. But in the case of restaurants and recreation, it really wasn't supported by data," the mayor said.

"The spring was disastrous, and I was worried we're going to see businesses go under if we don't give them a plan to reopen."

Brown hopes the province will give restaurants a blessing to reopen soon.

"I really believe that when there's a will, there's a way. And if it's earlier closing hours, smaller capacity, we can do it. We can reopen these safely," he said.