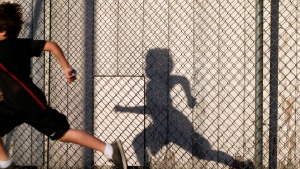 Before the pandemic, Canadian children were barely getting a passing grade for overall physical activity and sedentary behaviours.

Restrictions from the COVID-19 crisis have made things even worse, according to numbers released Wednesday by Participaction.

The report card gave children and youths a D-plus for overall physical activity and a D-plus for sedentary behaviours, according to a two-year stretch of research and data analysis through February 2020.

"This report card confirms that children and youth in Canada are not as active as they should be and have too much screen time," said Participaction scientist Dr. Mark Tremblay.

Only 39 per cent of children (aged five to 11) and youths (12 to 17) met the national physical activity guidelines of 60 minutes of moderate to vigorous physical activity per day, according to Participaction, a non-profit group that promotes healthy living.

Included in the report card was a six-day snapshot of research from an upcoming study, taken from mid-April when COVID-19 restrictions were in place.

It found 4.8 per cent of children and 0.8 per cent of youths were meeting 24-hour movement behaviour guidelines, down significantly from 15 per cent prior to the pandemic.

The study, online now and soon to be published in the Journal of Sport and Health Science, also indicated lower physical activity levels, less outdoor time and higher sedentary behaviour (including screen time) during the outbreak.

Tremblay said family members can serve as "critical influencers" for kids' activity levels and suggested that adults model the behaviour they would like to see from their children.

He suggested regular bedtimes and screen-free bedrooms to help with good sleep habits, using a device basket at meal time, having device-free days and getting outdoors more often.

"When you get outdoors you tend to use your screens less and you tend to be active more," he said. "You benefit from all that the outdoors has to provide for you: fresh air, social interaction, connection with nature, all those sorts of things."

This report by The Canadian Press was first published June 17, 2020.