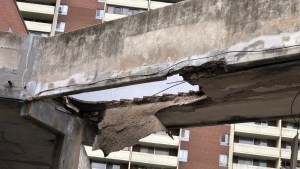 A pedestrian walkway that collapsed near Victoria Park and Danforth avenues on Saturday morning is shown. (Peter Muscat)

Part of a pedestrian bridge near an elementary school in the city’s Crescent Town neighbourhood has collapsed, though no injuries have been reported.

The bridge is located on Massey Square, which is near Victoria Park Avenue and Danforth Avenue.

One man who lives in a nearby building told CP24 that he heard what sounded like concrete falling at around 6:05 a.m. and immediately went out on his balcony to see what had happened, at which point he spotted a “big gaping hole” in the bridge.

While there was nobody on the bridge at the time of the collapse, the man said he did speak with one person who was about to pass underneath it when the concrete began to fall.

The man added that had the collapse happened when classes were in session at the nearby Crescent Elementary School, the results could have been tragic.

The bridge is about 15 feet off the ground and provides a link between several nearby high-rises and the school.

“This is a bridge that is used very extensively by the elementary school children and their mothers and fathers. They often use the bridge to get to the school from the buildings here in Crescent Town,” Paul Stark said. “If this had been on a weekday, especially during the busy rush, there would have been potentially dozens and dozens; if not hundreds of pedestrians on that bridge.”

CP24's cameras captured some of the aftermath of the bridge collapse on Saturday morning. The footage shows a large hole in the brick walkway with the barriers at the sides of the bridge still largely intact.

As of Saturday afternoon, police tape had been put up around the bridge to restrict access to it and Toronto Fire was in the process of setting up fencing as well.

Structural engineers have also been called to the scene to assess the viability of the bridge.

“They will decide exactly how this could be repaired or whether or not they will have to tear it down,” Toronto Fire Platoon Chief Stefan Cloer told CP24, noting that firefighters will remain on scene until the bridge is “completely secure.”

Residents had complained about condition of bridge

Cloer said that everyone is “very fortunate” that the collapse happened on a weekend and not on a weekday, when he said it may have been a “different story.”

In a statement provided to CP24 on Saturday afternoon, TDSB spokesperson Ryan Bird confirmed that the board owns a small portion of the bridge but he said that the area where the collapse occurred is the responsibility of Pinedale Properties.

“We are thankful that nobody was injured in this morning’s incident. TDSB staff have secured the school end of the bridge – a small portion of which is owned by the school board. The remainder of the bridge, where the structure failed, is owned by Pinedale Properties and is not maintained by the TDSB,” Bird said. “While we will be reaching out to Pinedale Properties to determine next steps, in the meantime, we will be advising parents that the bridge is not accessible until further notice.”

The City of Toronto says it issued an order to repair the bridge in Nov. 2015 because the concrete was deteriorating and rebar was becoming exposed.

In Sept. 2016, someone obtained a building permit to apply temporary shoring to the bridge.

Another permit was obtained in Jan. 2017 to rebuild the portion of the bridge belonging to the TDSB, while the Pinedale Properties’ side would remain as is.

An inspection conducted after Jan. 2017 “did not conclude that the bridge was unsafe,” the city says, so no order deeming the bridge unsafe was issued at that time.

But in wake of the collapse, the city says it is “likely” it will issue an Unsafe Order and require that something be done to ensure the safety of residents.

“Remedial action could include more temporary shoring, blocking off all access to bridge, or a recommendation that the bridge be demolished. It is too soon to determine this outcome,” City of Toronto spokesperson Tammy Robinson told CTV News Toronto.

Residents in the area have told CP24 that the TDSB did repairs on its side of the bridge last year, which included reinforcing the walkway. The residents, however, have said that similar repairs were not completed to the side of the bridge that Pinedale Properties is responsible for.

One man who lives in a nearby condominium building said that he is not surprised by the partial collapse of the bridge. He said that some of the residents in his building reached out to Coun. Janet Davis a few years back regarding the safety of the structure and learned that it was the responsibility of Pinedale Properties. He said the residents then contacted Pinedale Properties with their concerns but never got a response.

"It is not surprising this happened. Thank God it didn't happen during school time," Randy Mehew said. "The traffic along that is worse than the highways."

In a statement posted to Twitter on Saturday, Beaches—East York MPP Rima Berns-McGowan expressed dismay at the incident, which she said could have been “catastrophic.”

Meanwhile, at least one parent who was walking through the area on Saturday morning told CP24 that questions should be asked about what happened.

“I am horrified. This could have happened during school time,” said the man, who has a young daughter who attends Crescent Elementary School.