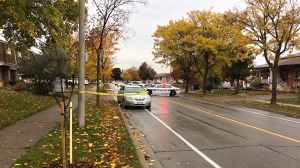 Police are investigating after a woman was struck by a car in Mississauga on Oct. 22, 2020. (Sean MacInnes/CTV News Toronto)

A pedestrian has been rushed to hospital after being struck by a vehicle in Mississauga Thursday morning.

Emergency crews were called to Darcel Avenue and Corliss Crescent, near Morning Star Drive, around 7:10 a.m.

Peel paramedics say a woman was taken to a trauma centre in life-threatening condition.

Police say the vehicle involced in the incident remained at the scene.

Roads in the area are closed while police investigate.