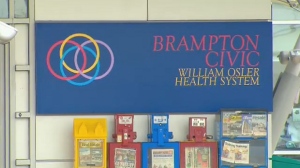 The top public health official in Peel says that the region’s hospitals “are cancelling elective surgeries and are starting to provide care in non-traditional spaces” as they struggle to treat an influx of COVID-19 patients.

There are currently 131 COVID patients being treated within the two major hospital networks serving Peel – the William Osler Health System and Trillium Health Partners – including 29 in intensive care.

That means that about one out of every five patients hospitalized with COVID-19 in Ontario right now are being treated in Peel, a region that makes up just 10 per cent of Ontario’s population.

“Our hospitals are both still at capacity and they are cancelling elective surgeries and they are also starting to provide care in non traditional spaces which really means that things are probably going to get worse before they get better,” Medical Officer of Health Dr. Lawrence Loh warned during an interview with CP24 on Wednesday morning. “We are going to have to see where we land in the next week or so.”

The surge in infections that Peel was experiencing in October and early November has mostly abated and the daily number of new cases in the region has flat-lined to a certain extent.

The region, however, continues to have the highest weekly incident rate in Ontario with 185 new infections per 100,000 residents and Loh said that hospitalizations are unfortunately a “lagging indicator.”

“We all know there was a lot of focus on Diwali and Bandi Chhor Divas in the middle of November so all of these are contributing to a fairly turbulent picture in Peel,” he said. “The hope is that if will continue to see consistent numbers throughout this week and into next week we will then see the impacts of the interventions that were brought in around the grey lockdown to reduce contacts and interactions and thus slow transmission in our community.”

Officials had previously warned that some Ontario hospitals would have to cancel elective surgeries once the number of COVID patients in ICUs crossed the 150 threshold, something that happened two weeks ago.

Speaking with CP24 on Wednesday, Brampton mayor Patrick Brown said that the region was probably always going to be impacted more than others due to the comparatively low number of hospital beds it has on a per capita basis.

Nonetheless, Brown said the warnings from Loh are “concerning” and now have him worried that the 28-day lockdown put into place last month could be extended past Dec. 21.

“The provincial average for hospital beds is 2.19 beds per 1,000 residents and in Brampton we have .96. so we have half the hospital beds per capita than the provincial average and went into this with a disadvantage,” he said. “Hearing that this lockdown could be longer than 28 days you know I hope it doesn’t get to that because I do believe there are businesses that will go under. There are retailers and restaurants that are really struggling to stay afloat and the promised financial assistance hasn’t really materialized for them.”