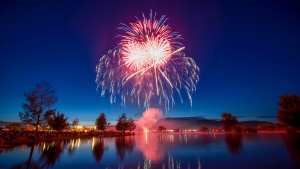 A year-old petition to restrict fireworks in Brampton reached nearly 9,000 signatures and now the city is set to ban the sale and use of fireworks at its next council meeting.

The Change.org petition was created by a ‘Brampton resident’ who wanted either a “firework mandate” to restrict what days and times pyrotechnics can be shot off, or an outright ban “as these issues are increasing in the Brampton area and surrounding.”

As of Friday, 8,863 people have signed the petition of its total 10,000 signature goal. The excessive noise—particularly late at night—the environmental impact, and the frequency of them are among the reasons why Brampton residents signed the petition.

In a news release issued Thursday, the City of Brampton announced a ban on fireworks could be coming soon, prompted by a rise of complaints from residents since 2019.

Following a unanimous vote to amend the fireworks by-law at a Committee of Council meeting on Wednesday, Brampton is set to ratify the motion on Nov. 28 and make it immediately illegal to set off or sell fireworks in the city at any time.

Currently, residents are only allowed to set off fireworks four times a year on their private properties: on Victoria Day, Canada Day, Diwali and New Year’s Eve.

They can also only fire short-range pyrotechnics that travel less than three metres, roughly the height of a basketball hoop, off their private property for those holidays. Fireworks that fly higher than that are illegal, as well as setting them off on public spaces like sidewalks, streets or parks.

If the recommendation is ratified, the proposed by-law will scrap all the rules that allowed residents to set off fireworks without permits on those holidays. The film industry and city-run events will be excluded from the ban.

To celebrate Diwali, the Festival of Lights, with fireworks, Brampton says it will add a yearly city-run celebration similar to New Year’s Eve and Canada Day in 2023.

“We have heard the concerns of our community regarding the Fireworks By-law, and it is our goal that by amending it, we will all enjoy our holidays safely and without disruption, excessive noise or debris,” Mayor Patrick Brown said in the news release.

“I thank everyone for making their voices heard on this topic, and look forward to welcoming residents to our first annual Diwali celebration event next year!”

FIREWORKS POLICIES ACROSS THE GTA

In Toronto, fireworks can be set off on private property – without a permit – on Victoria Day and Canada Day until 11 p.m. Otherwise, a permit is needed to do so.

Pyrotechnics are banned in parks and on beaches, and similar to Brampton’s current rules, fireworks cannot be set off in a street, parking lot, or on a balcony.

Those caught igniting fireworks, firecrackers or rockets at a Toronto park can be charged with a $600 fine, under the city’s parks bylaw. The fines under Toronto’s fireworks bylaw range from $600 to $1,000.

The same rules apply in Vaughan, Markham, and Richmond Hill for when residents can use fireworks for holiday celebrations.

Oshawa allows family fireworks to be set off on Diwali, Victoria Day, and Canada Day between dusk and 11 p.m. Meanwhile, in Whitby, residents can set off fireworks on those holidays, and on both New Year’s Eve and New Year’s Day.