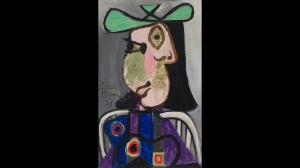 TORONTO - A Pablo Picasso portrait has sold for $9.1 million, making it the most valuable work by a non-Canadian artist to sell at auction in the country.

The 1941 painting sold Wednesday at the Heffel Fine Art Auction House depicts photographer Dora Maar, who during her relationship with Picasso served as the principal subject of his “Weeping Woman” series.

The pre-auction estimate for “Femme au chapeau” was $8 million to $10 million.

The Canadian highlight of the auction was the Emily Carr painting “Street, Alert Bay,” which fetched $2.4 million.

It was painted in 1912 upon Carr's return from a trip to France and depicts a First Nations village in British Columbia.