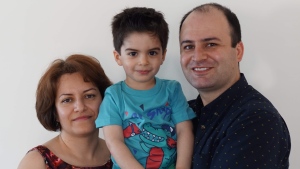 Razgar Rahimi, right, his spouse Farideh Gholami and their son Jiwan Rahimi are seen in an undated family photo. Family friend Mariana Eret says Gholami was pregnant. The family died aboard a Ukrainian airliner which was shot down near Tehran last week that killed 176 people. THE CANADIAN PRESS/HO-Mariana Eret,

It was only a few years ago that Shaho Shahbazpanahi remembers moving his friend Razgar Rahimi and his young family into their home.

He's now trying to figure out what to do without them, not only in terms of grieving their loss, but how to take care of everything they left behind in Stouffville, north of Toronto.

Rahimi, his wife, Farideh Gholami, and their three-year-old son, Jiwan Rahimi -- "little Razgar" as Shahbazpanahi called him -- were among the 176 passengers who died when a Ukraine International Airlines flight was shot down by the Iranian military near Tehran last week.

"I get up each hour during the night and I feel something's missing," Shahbazpanahi said.

Friends say the couple, who arrived in Canada six years ago without any other relatives, made lasting relationships and friends became like family.

Gholami, a talented jewelry designer, was seven months pregnant with their second son when she died and had already decorated a room for the new baby.

"Razgar and Farideh always dreamt of having a big family," said Arin Minasian, another close friend.

Shahbazpanahi said he's been in touch with the family's relatives in Iran hoping to find out what they want done with the couple's two vehicles and their belongings inside the rental house.

There were 57 Canadian citizens killed and many more of the dead had ties to Canada.

What will happen to victims' belongings is a concern for the Iranian Heritage Society of Edmonton, said president Reza Akbari.

He said most of the 13 passengers from Edmonton were first-generation immigrants. He doesn't know how many of them had relatives living in Canada.

Akbari believes some people who knew the passengers, including international students studying in Canada, may be wondering what to do with their things.

His group recently sent out a message to its networks in Farsi asking people to get in touch to help facilitate communication with relatives in Iran or to get legal advice.

Mortazavi, who deals with estates as part of his family law and immigration practice, said relatives of someone with assets in both Iran and Canada could find themselves dealing with Canadian and Iranian law.

Travel could also be an obstacle.

"Imagine there's a passenger, Ms. Jones, who is an Iranian-Canadian living in Vancouver for the past 30 years. Now Ms. Jones has no relative or next of kin or a friend that she named as an executor in Vancouver, but she has a sister in Iran and that sister wants to apply to be her executor," Mortazavi said.

"It would be very difficult for that sister to travel to Canada in order to apply through our B.C. Supreme Court to become appointed as the executor."

Canada's lack of a diplomatic relationship with Iran makes it tough for an Iranian to acquire a temporary resident visa, he added.

The federal government says it has established a dedicated email and phone line to help victims' families who urgently need visas to travel to Canada.

Mortazavi said a death certificate is also necessary to handle a person's affairs and relatives could be waiting for Iranian officials to issue one.

Sending money back to Iran also can be difficult because of sanctions.

Settling a victim's affairs could take up to a year, he said.

Shahbazpanahi said he's talking to the couple's landlord and has done things such as cancel their internet. At this point, he doesn't know what's going to happen to everything inside the home.

He's unsure if the couple had a will or if their relatives, now dealing with funerals, can travel to Canada to sort things out.

Shahbazpanahi anticipates that one day he will have to go inside his friend's house to help pack things away.

"That's going to be my worst day ever."

This report by The Canadian Press was first published Jan. 17, 2020