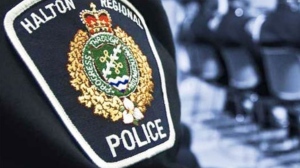 Three teens are facing criminal charges after police allege they pointed replica firearms at students in the hallways of a Georgetown school.

Officers were called to Georgetown District High School, located at 70 Guelph Street, shortly before 3 p.m. Thursday after a staff member told police they saw students with what appeared to be guns inside the school.

The building was placed under lockdown as a precaution and nearby Holy Cross Elementary School was also briefly placed in hold and secure.

The lockdown was lifted at around 6:30 p.m. after students and staff were cleared from the building and the school was deemed to be safe.

In a news release issued Friday, Halton Regional Police said they determined that the firearms were actually props from the school's Theatre Arts department.

“After locating the replicas, it is alleged that the students began pointing them at other unsuspecting students within the school hallways, prompting school officials to call 911 and initiate a lockdown,” police said in the news release.

“Upon the lockdown, the involved students fled the school and discarded the replicas in and around the school property, all of which were later retrieved.”

Three students, ages 14, 16, and 17, have now been charged with theft and possession of a weapon for a dangerous purpose.

The suspects cannot be identified as per the provisions of the Youth Criminal Justice Act.

Police say a 15-year-old student who was also taken into custody following the incident was released without charge after investigators discovered that his involvement was “minimal.”