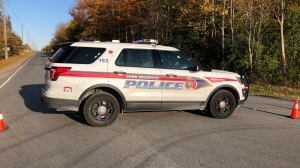 Police are appealing to auto body and repair shops in the Greater Toronto Area that may have recently repaired the suspect vehicle in a fatal hit-and-run in East Gwillimbury last week.

York Regional Police say they found a deceased 70-year-old male pedestrian on Davis Drive between Bales Road and Warden Avenue at around noon on Sept. 28.

Police say that investigators are currently looking to identify a male wearing reflective clothing who is believed to have stopped in the immediate area of the scene in a green Toyota Corolla.

Investigators also say they are now appealing to all auto body and mechanical repair shops within York Region and the Greater Toronto Area that may have recently repaired a dark-coloured Toyota truck or SUV.

Any service shop staff member who may have had contact with this vehicle or its driver is asked to contact police.