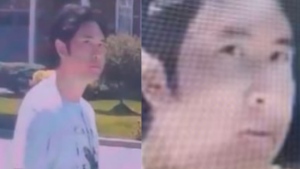 A suspect who allegedly exposed himself to multiple people in Richmond Hill last weekend in wanted by police. (YRP)

Police say a man is facing charges after a suspect exposed himself to a mother and her two children in a Richmond Hill park last weekend.

At that time, police allege a mother and her two young children were in the park when a male suspect approached them.

The suspect then pulled down his pants and exposed himself to the family, police said.

Police said that a day later, they received three additional reports of a suspect with the same description exposing himself to people in the area of Valmont Avenue and Waterstone Street.

Images of the suspect were released by investigators on Monday in an effort to identify him.

York Regional Police say that on Tuesday morning at 6 a.m., they searched a residence in Richmond Hill and arrested a 30-year-old man inside.

He is facing five counts of commit indecent act and one count of indecent exposure.

Police declined to identify the man due to unspecified “factors.”

-With files from CTV's Phil Tsekouras