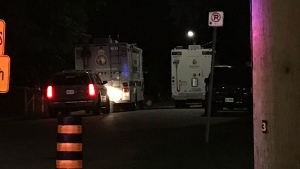 Police took a person into custody early Wednesday morning after a 10-hour long standoff outside a home in Vaughan.

York Regional Police say officers went to a home on Goodman Crescent near Gram Street in Maple at 5 p.m. Tuesday to execute a search warrant.

A person inside the home told police they had a weapon and refused to come out.

Officers retreated and the tactical unit and a crisis negotiator were called in.

Tactical officers surrounded the home while negotiations went on into the night.

Sometime before 3:20 a.m. Wednesday, police said the person inside the home was taken into custody.

It is not known what charges will be laid.