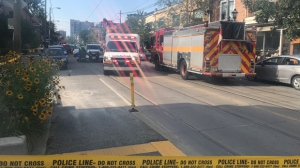 Emergency crews are seen on Roncesvalles Avenue after a man was shot to death there on Aug. 16, 2019. (Kelly Linehan/CP24)

A man was fatally struck by gunfire on Friday afternoon in Roncesvalles and police said they believe the incident was a targeted drive-by shooting.

Emergency crews responded to reports of multiple shots fired outside of Domani Restaurant, located in the area of Roncesvalles Avenue and Grenadier Road, at around 4 p.m.

“Once officers got here they found a man suffering from gunshot wounds, he has since been pronounced dead,” Det.-Sgt. Andy Singh told reporters at the scene on Friday evening.

Singh said investigators believe the incident was targeted based on the evidence they have recovered from the scene thus far.

“From what we know of the scene so far, it seems to be a targeted shooting, specifically for the gentleman who is now deceased,” he said.

A suspect vehicle, described as a white older model Mercedes Benz SUV, was in the area “for a considerable amount of time” prior to the deadly shooting, Singh said.

“At this time, I believe the vehicle had a driver in it and the shooter, I believe, entered a passenger door of the vehicle,” he said.

“We have recovered some evidence from the scene here and we do have forensic officers who are continuing to comb through and find more.”

The suspected shooter in the incident has only been described by officers thus far as a male with light skin, possibly Asian or Latino, standing five-foot-11 with a skinny build.

A firearm was recovered by police at the scene.

A resident of the area told CP24 she was stunned something like this could happen in her neighbourhood.

“Roncesvalles has always been a place that I considered very safe,” Olivia Nocida, who said she has lived in the area for 20 years, said.

She said the stretch of the street where the deadly incident took place in broad daylight would have been teeming with pedestrians at the time.

“I am always walking along Roncesvalles Avenue and that’s something that’s extremely upsetting.”

Anyone with further information regarding the investigation is asked to contact officers or Crime Stoppers anonymously.

Emergency crews are seen on Roncesvalles Avenue after a man was shot to death there on Aug. 16, 2019. (Kelly Linehan/CP24)