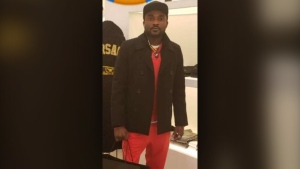 Toronto police have identified the 36-year-old man who was shot and killed in Swansea on Saturday night. (CP24)

Toronto police have identified the 36-year-old male victim who was fatally shot in the city's Swansea neighbourhood on Saturday night.

Emergency crews were called to a housing complex in the area of Windermere Avenue and Swansea Mews, just north of the Queensway, for reports of a shooting at around 7:45 p.m.

Police said a man was sitting in his car when he was shot multiple times by a unknown person from a car that pulled up beside him.

The victim was without vital signs when officers arrived, police said. He was rushed in life-threatening condition to hospital, where he was pronounced dead.

He has been identified as Tresor Tresor Kininga, of Toronto. The shooting marks the city's 58th homicide.

Police said a post-mortem examination is scheduled on Monday.

Investigators are appealing to anyone who was in the area and who may have a video or dashcam images to contact police or Crime Stoppers.

Toronto police have identified the 36-year-old man who was shot and killed in Swansea on Saturday night. (CP24)